I found myself appropriately distressed at the prospect of seeing Tammy Faye Starlite’s tribute to the Rolling Stones’ 1967 album Their Satanic Majesty’s Request without benefit of cannabis or strong hallucinogens yesterday. But you’re ahead of me, I bet — for it was trippy enough without any need to gild the lily.

News of the announced series of performances at Pangea filled me with no small excitement. This was one of my favorite record albums as a teenager, and Tammy’s previous tributes to Nico, Marianne Faithfull, Blondie and the Stones’ Some Girls, not to mention her original country character, whom I’ve come to call “Tammy Classic”, all knocked my knickers off. The new homage was an interesting choice, for it is in many ways the antithesis of Some Girls. If Some Girls is a cocaine album (and it is), then TSMR is an acid album. Some Girls may well be the Stones’ most commercially savvy product, tight, catchy, danceable, and so formulaic it even repeats its own formula several times within the same record. TSMR is more like the Velvet Underground tracks Tammy performed with some of these same musicians a few years back: experimental to the point of recklessness, often aimlessly improvisational, and full of strange sounds (including exotic instruments) that must be fiendishly hard to reverse engineer. It is often said to be the Stones’ answer to the Beatles’ Sgt. Pepper, though in reality it is much more like their next album Magical Mystery Tour, which contains self-indulgent jams, unfinished fragments, head scratchers and certain particular sounds which are simply unpleasant. Don’t worry! I said, TSMR was one of my favorite albums and I meant it. No risk, no reward. In time, TSMR would come to be regarded as the Stones’ least characteristic album, dominated as it was by the acid-fueled musical visions of the group’s rapidly deteriorating founder, Brian Jones. In short order, Jones would be arrested for drug possession. Then he drifted away from the rest of the band, was eventually fired, and died mysteriously in his swimming pool. That’s too far out, man! Once Jones was out of the picture, the Stones went back to the blues and rarely strayed too far outside of a very narrow, safe though potent, stylistic range. 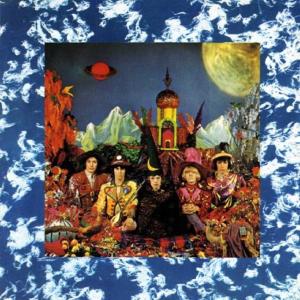 Naturally, TSMR is the Stones’ most pretentious record, but adorably pretentious in the same way most of their peers were in the ’60s. They read poetry, they listened to classical music, they went to art galleries, then tried to incorporate all of these influences into rock songs. The Stones of 1967 shared with Pink Floyd, for example, a love for both Medievalism and science fiction/ fantasy. It was a time when rock bands sang about gnomes and castles and space travel, and well…wore wizard costumes. Recreating the album straight-up would be entertaining enough, but it also presents lots of room for Tammy Faye’s patented parody. Everything she does is a sort of hybrid between herself and the chosen subject: the performance is a child of those two parents. The current incarnation initially threw us a curve ball, though. She’s doing Mick’s accent, but she’s dressed like an elegant female cabaret performer — herself essentially. What’s that all about? (Correct me if I’m wrong, Tammy, but…) I decided that the singer was psychically channeling Mick. As this fits the album’s trippy subject matter to an aesthetic tee, that’s gotta be it.

Like the album itself, she totally pushes the envelope on how long you will sit still for the riff, improvising wild psychedelic gobbledygook between songs for fully half of the evening’s 90 minutes.  Because it is Tammy, the remarks are also totally plugged into the day’s events, and I mean the DAY’S events. Some of the references are so fresh it feels like we got the tweet she’s referring to just before we walked in the door. But, in true faux hippie spirit her monologues are full of bastardized Eastern mysticism, and references to, like, Blake and Huxley. Every quote (and remarkably she quotes these writers from memory) seems to fold back on itself, prevaricate, self-abnegate. If daylight is the essence of it all, nighttime is too, man! Everything (even evil) is beautiful, accepted, embraced. Just as Brian Jones was probably embracing the water as he sank to the bottom of the swimming pool. “Even yes is no! We don’t hear no — it’s the Kavanaugh rule!” she quips in the perfect splicing of her Yesterday and Today sensibilities. The stream of consciousness pop culture juxtaposition can be jaw dropping — she goes from quoting Keats to explicating moments on Match Game and Family Feud in nearly the same breath.

Haha, and that’s just the patter! As for the core of the show, the tunes, Tammy and her band made a silk purse…out of a silk purse, baby! If you’re like me you wondered how they would do it, and they do do it, using modern stand-in equivalents for things like melotrons and sitars and the like. As for the more quotidian guitars, drum, bass, piano, these guys could do these tunes in their sleep — much as I’m sure the Stones did when they were recording it (oh also, the snoring from “In Another Land” is also reproduced). A tip of the wizard hat to musical director/guitarist Keith Hartel, multi-instrumentalist Richard Feridun (sort of the Brian Jones stand-in), keyboardist David Nagler, drummer Ron Metz (the closest visual ringer for his Stones counterpart Charlie Watts, particularly in his Renaissance courtier outfit), and bassist Larry Heinemann, who did Bill Wyman proud by taking the lead vocal on Wyman’s harpsichord-driven “In Another Land“. I loved that song so much in high school I proposed to my steady girlfriend that it be “our song”. (She never actually said “no”, so I guess it was).

And as for Tammy — I can’t imagine  that any of these tunes (though I love them) presents her with much of a challenge given what she’s capable of, although she found ways to dazzle that aren’t on the album. The evening’s show stopping moment is probably when she springs wild Yoko Ono style vocal acrobatics on us from out of nowhere, bleating and howling and ululating from the pit of her stomach out the top of her head. I was also impressed by the fact that she found a way to include the album’s hidden track “Cosmic Christmas”. Along with all the album’s other songs, including the ones you probably know best “She’s a Rainbow”, “Citadel” and “2,000 Light Years from Home”. She’s an entertainer. She works the crowd. She threw in some modern dance. She even put down a drunken heckler until he was cowed into submission.

With bomb scares afoot, and a terrifyingly important election only days away, last night I got a bit of deja vu, recalling the days following November 8, 2016, when cabaret shows by Gay Marshall and Mink Stole helped get me through tough times. Fortunately for you, Tammy’s show has been extended. The next performance as it happens is November 8, 2 days after the election. If something bad happens, go see it. If something good happens, go see it. It’s all good, man. Tickets are here.