On the Literary and Libidinous Miriam Hopkins 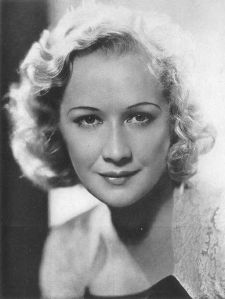 Don’t read too much into that description, I just like alliteration. On the other hand, yeah, she was one of the sexiest of all Pre-Code actresses. She had much in common with Tallulah Bankhead — more than I realized. For, like Tallulah, Hopkins was a wayward Southern belle, from Georgia near the Alabama border (Tallulah was from Alabama). Somehow, rather obtusely, I’d always assumed Hopkins was English. I’m usually extremely good with accents; I guess I’d never drilled down into hers. And Miriam Hopkins is an extremely English name, you will admit. Anyway, audiences of her day were not confused. In fact, Hopkins even replaced Bankhead as Sabina in the original Broadway production of Skin of Our Teeth!

When she was a teenager, Hopkins’ parents separated and she was to taken by her mother to live in Syracuse, where her uncle was a professor. Hopkins studied there and at at Goddard College (then Goddard Seminary) in Vermont.

Before graduating, she moved to New York, studied dance, and got cast in the chorus of the Music Box Revue (1921-22). Next she got a speaking role in the musical Little Jesse James (1923). This was a springboard to over a dozen Broadway parts including the first stage adaptation of An American Tragedy (1926-27) and the lead role in the original production of Jezebel (1933-34). Southern belle, indeed!

Hopkins’ movie career launched in 1930. She makes a HUGE impression in her racy role in the 1931 version of Dr. Jekyll and Mr. Hyde. Dayum! The mere memory of it increases my heart rate. Ernst Lubitch cast her in The Smiling Lieutenant (1931) Trouble in Paradise (1932), and his 1933 adaptation of Noel Coward’s Design for Living. In 1933 she starred in one of the most lurid of Pre-Code melodramas, The Story of Temple Drake, adapted from a Faulkner novel, where she gets raped by a gang of backwoods rednecks. She was nominated for an Oscar as the title character in Becky Sharp (1935), an adaptation from Thackeray’s Vanity Fair. And she is great in classic westerns like Barbary Coast (1935) and Virginia City (1940).

In the 40s, Hopkins had a famous, highly publicized feud with Bette Davis, who after all got to play the film version of her character in Jezebel, and (Hopkins thought) was dallying with her husband at the time, movie director Anatole Litvak. Through the ’40s, she spent more time on Broadway than on movie screens. A notable film from this period was The Heiress (1949), a screen version of Henry James’ Washington Square, although Olivia de Havilland was the lead. But she was never without work. Throughout the 1950s, she did tons of dramatic television.

In her later roles, she stayed close to her racy roots, and even exceeded them on occasion. Projects included the film of Lillian Hellman’s The Children’s Hour (1961), Russ Meyer’s Fanny Hill (1964), and the downright AMAZING Savage Intruder (1970), which we wrote about here. It was her last role. She might well have gone on to do more, but a heart attack took her two years later, at the comparatively young age of 70.

While known for her vivaciousness and beauty, Hopkins also had a quality of wit and intelligence that radiated on the screen, which is what made her so suitable for so many literary and stage adaptations. Apparently (and not surprisingly) this characterized her private personality as well, and she was known as a popular Hollywood hostess who traveled in intellectual circles.