I don’t normally throw a big party on Penny Marshall’s birthday but it seemed a good occasion to do a post on Laverne and Shirley (1976-1983). I was a big fan of this sitcom during my tween years when it was at its peak, and have recently gone back to watch a couple of episodes and was surprised at how well it holds up.

As a Happy Days fan, I was there from the beginning. The characters of Laverne DeFazio and Shirley Feeney had debuted there in late 1975, as double dates of Fonzie (Henry Winkler) and Richie (Ron Howard). In this initial iteration, both girls were coarser and crasser, most jarringly in the case of Shirley (Cindy Williams) who later evolved into a sort of contrast with the Brooklynese Laverne. The show was produced by Penny’s brother Garry Marshall, who essentially borrowed and feminized the formula of his previous hit The Odd Couple, making Laverne a streetwise tomboy, and Shirley, a bookish, shyer prissy type. (I admit ,Shirley was always my favorite of the two). The other brilliant innovation was to add a lot slapstick, evoking I Love Lucy which had originally aired in the 1950s, the same period when Laverne and Shirley was set. Penny Marshall had earlier had a recurring part on The Odd Couple as Oscar’s secretary Myrna. Cindy Williams had been in American Graffiti (1973), with Ron Howard, the show which had inspired Happy Days.

The other thing to love about the show was that it was about the working class. Laverne and Shirley (one Italian, one Irish) worked at the fictional Schotz brewing company in Milwaukee, on an assembly line. They lived in a cheap basement apartment. The terrific theme song and credit sequence set the whole thing up beautifully, and rallied the viewers to their side.

Also memorable in the cast were Michael McKean and David L. Lander as the idiotic greasers Lennie and Squiggy who lived upstairs, and always burst into Laverne and Shirley’s apartment without knocking. The gag would always be that a character would say something like “What kind of morons would do such-and-such?” and then the door would burst open revealing the pair of them and Squiggy would honk his trademark catchphrase, “Hello!” McKean and Lander had actually been performing these characters in live performance in coffeehouse and comedy clubs since their college days at Carnegie Mellon. They were easily transplanted into the show. In 1979 they released a record album of original ’50s style songs, mostly written by McKean, called Lenny and the Squigtones. I owned it. No word of a lie, it was a huge influence on me, and I can still sing many of the songs from memory.

Shirley’s boyfriend, a singer, dancer, and boxer named Carmine was played by Eddie Mekka. This character is where I first heard about Tony Bennett (whom I would later work for). Carmine was always singing the early Tony Bennett hit “Rags to Riches”. Veteran stage actor and nightclub comic Phil Foster played Laverne’s father, who owned a combined bowling alley and pizza parlor called the Pizza Bowl. Their landlady Edna (who later hooked up with Lavern’s father) was played by Betty Garrett, a veteran of Hollywood musicals and All in the Family. 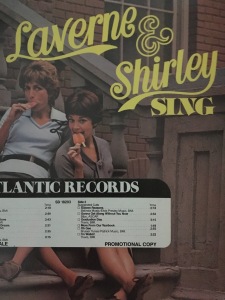 Somewhere around midway through its run, the formula for the series changed drastically. All of the characters moved to Burbank, California — as in, all of the characters from the show. This was too implausible for me to take even as a teenager. And the timeline moved up to the 1960s. I lost all interest when this happened; I’m not sure if I ever watched more than one of these episodes. Williams left the show due to pregnancy in 1982. Marshall hung on a few more months, but folded soon after that.

Williams’ career lost steam from this juncture. Since the early ’80s she has mostly done live theatre, and a couple of very short-lived sitcoms. Marshall, like her brother Garry, and Ron Howard, and former husband Rob Reiner, became a major Hollywood movie director, responsible for Jumpin’ Jack Flash (1986), Big (1988), Awakenings (1990), A League of Their Own (1992), Renaissance Man (1994), The Preachers Wife (1996) and Riding in Cars with Boys (2001).

McKean also went on to bigger and better stuff. He was a regular on Saturday Night Live during the 1994 season (I remember being particularly impressed by his Vincent Price impression), and has been in a long list of popular films (probably rates its own post) and lately has been doing the best work of his life on Better Call Saul. Lander subsequently did some film and TV work, but unfortunately developed multiple sclerosis in the ’80s, which pretty much took him out of the game. Phil Foster died in 1985; Betty Garrett in 2011.