Of Bill Irwin, Beckett and the Irish Rep 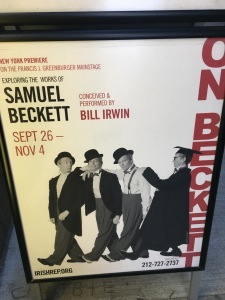 Big doings at one of my favorite NYC theatre companies, the Irish Repertory Theatre lately. I’ve loved everything I’ve ever seen at that theatre. More importantly (and this can’t be irrelevant) I simply love it THERE. I love to walk in the door. I find it warm and intimate and home-like. They clearly have a very engaged subscriber base, it’s almost like a family. You go there and everyone seems to know one another. The New York ice melts; whenever I’m there I’m so relaxed I find myself talking to strangers in the lobby. Anyone will tell ya, that’s not how I am. More than this, they do their job so well at the Irish Rep, they pick the right plays, they realize them so well. I get the feeling if I subscribed and saw every play, every season, I would love everything I saw there. Is that enough gushing? And I’m only 10% Irish!

It’s their 30th anniversary this year. I was in the neighborhood a couple of weeks ago so I popped by the block party they held to celebrate. Here are some pix from that event. (And yes, that’s Bill Irwin, the whole real point of this post so please read all the way through to the bottom!) 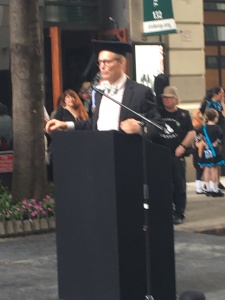 Bill Irwin was there to perform segments from his current show On Beckett.  I’m a huge Samuel Beckett fan, and have written plays and poems in imitation of his style, and indeed the first play for grown-ups I ever saw in a theatre was a 1979 production of Waiting for Godot at Trinity Rep in Providence starring Richard Jenkins and character actor George Martin. One of the reasons I’m a snob? Probably something to do with that. THAT’s my idea of theatre. Everything less than that pretty much looks like fucking around to me.

So, like thousands of others, I was very excited about Irwin’s new show. And beyond excited to get to see it, and then interview the man himself about it for Chelsea Now. This was my third interview with Irwin: the first time was for my book No Applause, Just Throw Money: The Book That Made Vaudeville Famous. The second (very brief) was for his show Hats Off. And now: third time’s a charm! The resulting article is here.