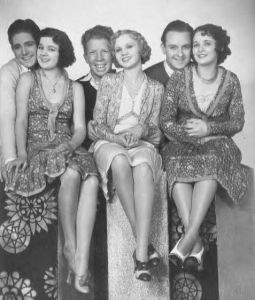 Twitter has declared it National Boyfriends Day, and so this post on a minor series of comedy shorts from the early ’30s. The Boyfriends was a talkie comedy series produced by Hal Roach between 1930 and 1932 as a kind of spinoff of the Our Gang series. It was conceived of by George Stevens as a replacement for Harry Langdon’s shorts for Roach, which had fared terribly.

The series was not a hit at the box office, performing less well than all of Roach’s other series: Our Gang, Laurel and Hardy, Charley Chase, and the all-female team team of Zasu Pitts and Thelma Todd. Roach pulled the plug on the series, replacing them with the “Taxi Boys” (Ben Blue and Billy Gilbert), although several of the Boyfriends’ principal players late co-starred in the independent features Adventurous Knights (1934), and Roaring Roads (1935). Cast members Sharpe and Messinger were briefly married.

As there were only 15 Boyfriends films made in the series during its three year run, it has grown more obscure than Our Gang or Dead End Kids/Bowery Boys. Bust rest assured hardcore classic comedy fans keep their eyes peeled for screenings!

For more on silent and slapstick comedy, including the comedies of Hal Roach please see my book Chain of Fools: Silent Comedy and Its Legacies from Nickelodeons to Youtube