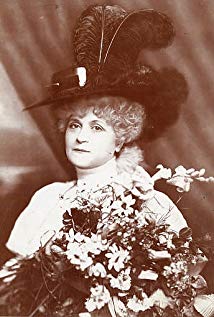 By Golly, you’ve just got to know about Henrietta Crossman (1861-1944)! well, you don’t, you really don’t, but perhaps, like me you won’t regret being made aware of this old time stage and screen actress with feet firmly planted in two different centuries of show business.

Crossman was the granddaughter of U.S. Army Officer George H. Crossman, who served in the Mexican and Civil Wars and rose to the rank of general. She was born in what is now West Virginia, just before it split off from Virginia following secession. Her mother was a niece of songwriter Stephen Foster.

In her early 20s, Crossman made her professional stage debut in Bartley Campbell’s The White Slave. Subsequently she toured with Robert L. Downing, performing Shakespeare and other classic works. In 1886 she married actor, playwright and director J. Sedley Brown and bore him a son. In the early 1890s she was managed in turn by Daniel Frohman, then Charles Frohman, launching her three decade long Broadway career. She became known in her younger years for demanding historical costume epics.

She played Nell Gwynn in several productions of Mistress Nell between 1900 and 1902. Other vehicles,many of them produced or written by Campbell, included Joan o’ the Shoals (1902); The Sword of the King (1902); and Mary, Mary, Quite Contrary (1905-06). In 1907, she brought Bunyan’s Pilgrims Progress to the stage as The Christian Pilgrim. Crossman was essentially on Broadway every year through the end of the 1920s, sometimes in original works, sometimes in classics such as As You Like It, The Merry Wives of Windsor, The School for Scandal, The Beaux Stratagem, and (the then pretty new) Trelawney of the “Wells”. According to the Sobels Illustrated History of Vaudeville, she also made occasional forays into vaudeville in one act plays, which is what originally brought her to our attention.

Initially Crossman was cautious about breaking into film. During the silent era, she was only in four movies. She played the title character in Allan Dwan’s The Unwelcome Mrs. Hatch (1914). Then came The Supreme Test (1915), Broadway Broke (1923), and Wandering Fires (1925), with Constance Bennett, directed by Campbell, who’d moved decisively to the film industry in 1920. With the coming of sound, Crossman (now of mature years) made the jump from stage to screen herself, appearing in the screen adaptation of the Edna Ferber–George S. Kaufman comedy The Royal Family of Broadway (1930), in which she, Ina Claire,  Fredric March, and Mary Brian played thinly veiled caricatures of the Barrymore family. She appeared in another 15 films through 1937, most of them pretty minor and forgotten, with the possible exception of Charlie Chan’s Secret (1936).

To find out more about  the history of vaudeville, consult No Applause, Just Throw Money: The Book That Made Vaudeville Famous, and for more on early film see Chain of Fools: Silent Comedy and Its Legacies from Nickelodeons to Youtube.