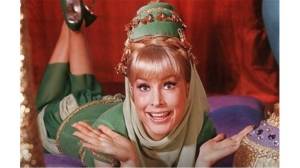 On a fan site someone recently posed the question: Bewitched, or I Dream of Jeannie? It’s no contest, right? On Bewitched, Samantha Stevens is the smartest and most together person on the show. Jeannie (Barbara Eden) is a SLAVE IN A BOTTLE. Don’t get me wrong: both shows stoked pubescent fantasies, but the Jeannie set-up is just plain wrong.

Actually I Dream of Jeannie is wrong in almost every way you can think of. The title of the show is of course taken from a famous Stephen Foster song about a girl with light BROWN (not blonde) hair. Djinn, or genies, are usually male; Barbara Eden’s Jeannie is much more like some sort of harem girl or belly dancer. Just as important, genies come from Middle Eastern mythology; Barbra Eden is an extremely Nordic looking blonde. And yet she speaks in a strange halting third world patois, which makes her appear simple-minded. Again, compared with articulate Samantha Stevens, there appears to be no contest. One (Sam Stevens) is the problem-solving mistress of her domestic realm and secret power behind her husband’s career; the other (Jeannie) is an implied sex slave on call 24/7 in a miniature seraglio. She calls her boss “Master”! It definitely feels a piece of the “Oily Man” phenomenon we wrote about here.

I Dream of Jeannie was the idea of Sidney Sheldon, who’d created The Patty Duke Show, and later became more famous as a potboiling novelist. Jeannie was devised specifically to take advantage of the proven success of Bewitched, and it enjoyed a good long run from 1965 through 1970. In Jeannie, Larry Hagman plays an astronaut who finds the bottle containing Jeanie on the beach; when she emerges, she falls in love with him and he can’t get rid of her. As with Darren of Bewitched, we are supposed to swallow the unlikely scenario that Major Nelson wants no part of this “having a beautiful magical slave” thing. He’s always trying to get rid of her, cramp her style and so forth. And she is always trying to help him and mucking things up with her magic. At the same time, he too is trapped, in a way. Eventually he does fall for her and they get married, because this is television. Hayden Rorke played Hagman’s stern boss Dr. Bellows; the priceless Bill Daily, later so memorable on The Bob Newhart Show, played Hagman’s buddy. But of course the best thing about I Dream of Jeannie is its theme song by Hugo Montenegro, which, once in your head, never leaves for days. So that is happening to you today. Sorry.

Barbara Eden (Barbara Jean Morehead, b. 1931) is more than just Jeannie however; there is a Before as well as an After. And I never dreamt how much Before. Born in Arizona and raised in San Francisco, Eden studied at the San Francisco Conservatory of Music and City College of San Francisco. She trained in both music and theatre, was a professional singer when still a teenager, and won Miss San Francisco in 1951 as Barbara Huffman (the surname of her stepfather). She began to break into film and television in 1956. I am astonished to see that she was in two dozen films prior to Jeannie, often in a lead role (astonished because I’ve seen many of these films, and don’t remember her in them). She had bit parts in such films as Earth vs. The Flying Saucers (1956) and Will Success Spoil Rock Hunter? (1957) but by 1960, she was starring in things like the noir thriller Twelve Hours to Kill (1960), and the Elvis Presley western Flaming Star. She’s in a couple of Irwin Allen films, Voyage to the Bottom of the Sea (1961) and Five Weeks in a Balloon (1962), and two fairly weird children’s movies The Wonderful World of the Brothers Grimm (1962) and Seven Faces of Dr. Lao (1964). One of the last of her movies from this period is The Brass Bottle (1964), which provided the inspiration for the Jeannie show, although in that film Burl Ives, and not she, played the genie.

Eden’s biggest post-Jeannie project was the movie and series Harper Valley PTA.  Based on the 1968 hit song, it was about a fun-loving widow’s battle against a bunch of small town busybodies and hypocrites out to punish her for her lifestyle. I really enjoyed the movie, which came out in 1978, for it had an all-star cast of great comedy character actors, including Louie Nye, Pat Paulsen, Bob Hastings and John Fiedler, along with the likable Nanette Fabray. In 1981 it was turned into a TV series by Sherwood Schwartz, with Eden returning, and a cast that including Fannie Flagg, Bridget Hanley, and George Gobel. It ran for two seasons.

After this, her best known project is probably the 1974 TV movie The Stranger Within, wherein she played a woman who is impregnated by aliens.  Most of her work of the last several decades has been in television and live theatre. In 2011 she wrote her inevitable autobiography, Jeannie Out of the Bottle.