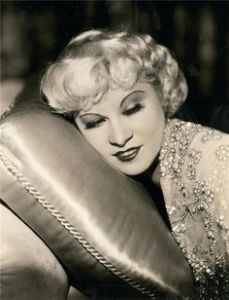 Well, we like to think Mae West is smilin’, wherever she is. All three days of West Fest opening weekend were a big success, and many thanks to all who helped it happen! Here’s a little photo record of what went down: 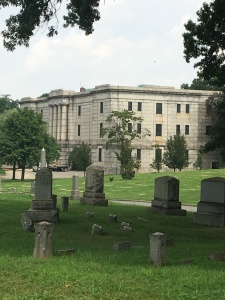 We kicked things off on Friday, August 17 (Mae’s 125th birthday) with a visit to her final resting place in Cypress Hills Cemetery.

She is interred, along with her parents and two siblings, in a section of a mausoleum called Cypress Hills Abbey, a sort of luxury hotel for the dead. Resting nearby are the remains of Victor Moore, Gentleman Jim Corbett, restaurateur Peter Luger, and for reasons too complicated to explain, a vitrine where Paderewski’s removed heart used to reside. Also a short walk away we paid our respects at the grave of Jackie Robinson.

Here’s the bunch that went. I’m the cat in the hat. Tour leader and author Kevin Fitzpatrick is to my right. Thanks for arranging and organizing this unforgettable day, Kevin.

Photography is not allowed at Mae’s crypt. No one was there to enforce the rule but I thought it only right to honor the family’s request. This photo (above) is off the internet. Some folks had left some tokens behind though — a fairly crazy love letter; a page from somebody’s Mae West screenplay; and what looked like a ticket for a bus station locker. Do they think Mae’s Ghost will redeem it to collect her gift? Our group hung out a bit and bonded, speculated about this and that, and listened to some of Mae’s music. We noted that Mae’s mother Matilda was the first in the family to pass away, in 1930. As this was a few years prior to Mae’s movie career, we deduced that she must have made a TON of money from her Broadway shows, in order to have afforded this highly extravagant burial set-up.

After the cemetery the group went to nearby Neir’s Tavern, where Mae is reputed to have performed. There is a little shrine to her there. The management thoughtfully brought out this piece of birthday cake, and the group sang happy birthday.

The group also stopped at a former West home, which like Neir’s, is located in Woodhaven. Mae bought this house for her family after she started making some bucks. Previous to this, the Wests had lived in various houses in Bushwick and Greenpoint.

The following day we convened for our big five hour Mae West symposium at Jefferson Market Library. The Library is located in a former court house where Mae was once tried for obscenity, and jailed for one night before serving eight days of a ten day sentence on what is now called Roosevelt Island.

The library honors her permanently with this:

And they honored us specifically with this:

The day unfolded like this: West Fest chair Michele Gouveia kicked it off with appropriate ceremony and many thanks for the library’s generosity in hosting us. Then I spoke on Mae and vaudeville (I learned a bunch of new stuff as I prepared my talk btw; a lot of that will go into sprucing up my posts about her on Travalanche); John Calhoun of the Billy Rose Collection at the Performing Arts branch of the New York Public Library, talked about Mae’s Broadway career; scholar and burlesque star Chicava Honeychild spoke on Mae and Race; and psychic, actress and writer Kathy Biehl, spoke about Mae and spiritualism. More on each of their excellent presentations below! At the climax (ha! I said “climax”) we were joined by moderator Grady Turner formerly of the Museum of Sex and New-York Historical Society; theatre director and scholar Elyse Singer (director of the first revivals of Mae’s Sex and Pleasure Man); and international burlesque sensation Dirty Martini for a lively discussion about what we love about Mae (and what we learn from her). The photo below is a little misleading: Grady, Elyse, Dirty and the others contributed far more than I did!

At the end of the event I realized I hadn’t earlier photographed the speakers during their talks, so I ran and snapped a few during the post-event wind-down:

Grady chats up John Calhoun. Among the many things I loved about John’s talk was his contextualizing of Mae’s playwriting by telling us about all the exciting stuff that was happening on Broadway in the twenties. Sexual content was shattering old Victorian norms everywhere at the time — Mae picked up that ball and ran with it. He also used the NYPL’s collections to terrific effect. Not just photos, but other cool stuff, like a manuscript from a late career revival of Mae’s Diamond Lil, where she had tweaked certain lines so they would refer back to her movie fame and legend.

Grady clearly working the room! Here he poses with Chicava Honeychild who spoke about the rich interactions between African American culture and Mae’s art (e.g., her inspiration from artists like Bert Williams, and her enthusiastic appropriation of black music, i.e. traditional tunes like “Frankie and Johnny”), as well as some ways in which she gave back. I knew this would be (and wanted it to be) a spirited discussion, and at moments it verged on the unruly but Chicava wrangled the audience like the great teacher she is — though she shouldn’t need to be the kindergarten teacher she occasionally needed to be here. I am hoping I can collaborate with her a lot more in the future on stuff like this. As events demonstrate daily (and they sure did on Saturday), nothing is more badly needed in this country right now than this particular cultural conversation. 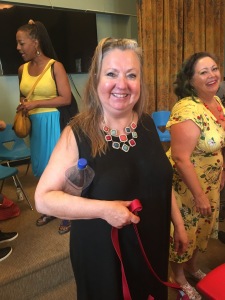 Our beloved Kathy Biehl also taught me much I did not know about Mae! I previously associated Mae’s spiritualism with her waning years, when her career was mostly over and she was holding court in her kitschy apartment. She wrote that book about ESP in the ’70s, for example. But Kathy laid the groundwork for a much more nuanced picture, first giving historical context, and showing that Mae’s interest in spiritualism started during its great heyday in the 1920s. Kathy says Mae was in the room with us that day, and I believe her.

Dirty Martini, no stranger to goofin’ around for the camera! Dirty is an obvious apple off of Mae’s tree, and she delighted us all by telling us what the comedienne meant to her in her younger years (and I had no idea when I booked her just how much she loves her). Mae was surprisingly prudish when it came to burlesque, but she lived in different times. I think she would have loved New Burlesque, and acknowledged somebody like Dirty to be a worthy heir apparent. It was a thrill to share the dais with the great Dirty Martini.

Chicava and Dirty with Elyse Singer. Elyse’s 1999 revival of Mae’s play Sex really opened my eyes to Mae’s unique talents as a writer. Everyone knows Mae’s quotable lines of course, but I grew interested in the architecture of her plays and screenplays, which normally have a melodramatic arc reminiscent of the 19th century classic she grew up performing in a child actress. Elyse brings hardcore feminist scholarship to the table, and a wide-ranging command of pop culture I relate to and appreciate. I was mighty happy to finally get to collaborate with her on something of this nature, as it was way overdue. (In fact, the idea of two of us talking on a public panel together is at least 3.5 years overdue, to be precise.)

Last but not least (there was no “least” on this panel), I was so excited to be reunited with my old colleague Grady Turner again. Grady and I first met and worked together at New-York Historical Society 20 years, back when we were both a couple of pupae in our respective cocoons, old as we were then. Grady went on to the Museum of Sex, where he hired me to do some voiceover work on an exhibition once, and that was the last time we’d seen each other, fifteen years ago. In years since, I have been following his work curating “Bare! True Stories of Sex Desire and Romance” with huge interest. He was a charming, lively, funny and thought-provoking moderator as I knew he would be, as that he what he does. It was the perfect cap to a perfect day.

On Sunday Michele Gouveia presented screenings of  She Done Him Wrong (1933) and Belle of the Nineties (1934). the house was full to capacity for both films.

STILL TO COME IN WEST FEST:

Proper attire is expected
Tickets must be purchased in advance, visit: https://www.comeupnseemethemusical.com/news 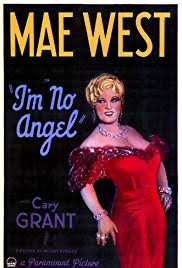