On the “Boneless” La Sylphe

The daughter of wealthy German-American inventor Arthur Langerfeld, La Sylphe began to dance seriously at age six. When she was still a child, her mother brought her on two European tours, where she performed in all the great capitals, becoming the toast of London’s Alhambra and Paris’s Folies Bergère.

In 1887 she began an American tour, starting on the West Coast, making the most of her European reputation. Two years later, at age 16, she made a smash (and some scandal) in New York, performing at such venues as Koster and Bial’s with a repertoire that included “The Vision of Salome”, a very early version of what would become a national craze nearly a decade later. The slim-wasted La Sylphe did a version of what was called a “muscle dance”, what some people still call a “belly dance” — flowing, snakelike, suggestive movements that originated in the Middle East and were revolutionary in the Victorian era west. Astonished reviewers said that she seemed “boneless” for she could do things like this: 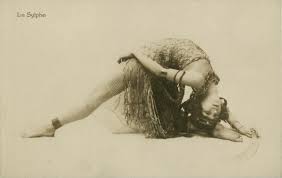 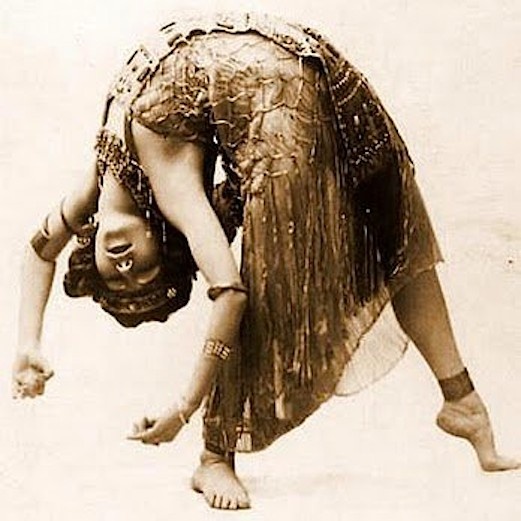 But La Sylphe was trained in many movement styles: she also performed ballet, Spanish dances with castanets, and many other types of dances to give variety and exoticism to her act.

In 1908, the Salome craze truly took off, and La Sylphe was booked for the touring editions of the Follies of 1907, and played the big time Keith and Orpheum vaudeville circuits for years. She was also in the 1919 and 1920 editions of George White’s Scandals, and the Greenwich Village Follies. In the late 20s and early 30s she was booked at prestigious institutions like Carnegie Hall and the American Ballet Guild.

To learn more about the variety arts, please see No Applause, Just Throw Money: The Book That Made Vaudeville Famous