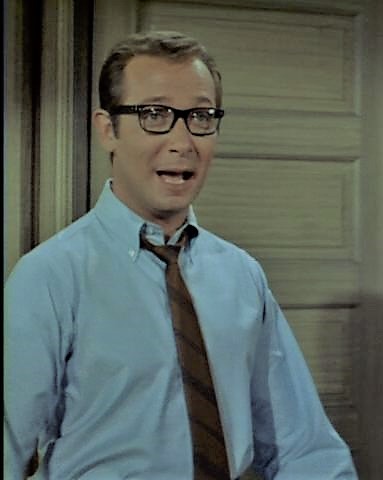 It is appropriate that we celebrate character actor Bernie Kopell (b. 1933) today (or any day), don’t you think?

To me it is ironic that the role Kopell is best known for (Doc on The Love Boat, 1977-87) is one of his less interesting ones. Oh, it’s fine, it’s fine, he’s likable in the part (and it’s frankly one of the better things about the show), but he had played such a wide range of colorful and hilarious roles prior to that, that Doc seems almost like a straitjacket. When The Love Boat premiered, Kopell was already a familiar face, even if most people didn’t know the name. He was the TV equivalent of what they used to call in the theatre a “Utility Man” — a guy who could do anything, so he worked all the time. Over the years he played Russians, Germans, Cubans, Mexicans, Italians, Irishmen, Native Americans, and lots and lots of Jews. Times being what they are, in recent years he’s stuck closer to his own identity.

Originally from Brooklyn, Kopell studied drama at NYU then served in the navy before settling in Los Angeles to try to break into the business. He had bit roles in movies like The Man from the Diner’s Club (1963) with Danny Kaye, and The Thrill of It All (1963) with Doris Day and James Garner, but really, almost the entirety of Kopell’s career has been spent in television. Early on, he had guest shots on many of the major sitcoms of the day, and repeated turns on The Jack Benny Program and My Favorite Martian.

In 1966 things started to break for him — he got two recurring, highly recognizable parts on two separate sitcoms at the same time: he was the hilarious ex-Nazi KAOS agen Siegfried on Get Smart (1966-69), and he was Ted Bessell’s boss and best friend Jerry on That Girl (1966-71). That’s not all! He played several recurring characters on Bewitched (most often the Apothecary) from 1969 through 1972. He supplied many hilarious voices for Lancelot Link, Secret Chimp in 1970. He played several characters on The Doris Day Show from 1970 through 1973 (usually the Italian neighbor Louie Pallucci). He was in several episodes of Love, American Style. From 1973 to 1974 he was a regular on the short-lived Garment District sitcom Needles and Pins, with Norman Fell and Louie Nye. In 1975 he Alan-a-Dale on Mel Brooks’ Robin Hood sitcom When Things Were Rotten.

On top of this: guest appearances on ALL the shows: The Dick Van Dyke Show, Night Gallery, The Chicago Teddy Bears, Ironside, The Odd Couple, The Bob Newhart Show, Room 222, Mary Tyler Moore, Kolchak: The Night Stalker, Hot L Baltimore, The Ghost Busters, The Streets of San Francisco, Kojak, Chico and the Man, The Six Million Dollar Man — this is just some of them. So when The Love Boat premiered in 1977, Bernie Kopell was no stranger to TV audiences, even a tween like myself. Like most “Doc” characters in an ensemble, his role was to be a sort of bemused, laid-back elder statesman, responsible, generous, and above the follies made by younger cohorts (not because he was a saint, but because he’d ALREADY committed his follies in his younger years). Unlike Gavin McLeod’s stern, humorless Captain, Doc was an authority figure who was also “one of them”. Audiences loved him for it, and now the role has sort of eclipsed everything he did before — and, as we have established, he had done a lot before.

Since Kopell was middle-aged during the Love Boat years, and had been on TV my entire life (and perhaps one of the first characters I saw him play, Siegfried, was an older man), I assumed he was a couple of decades older than he really is. He’s a spry 85 as I write this, and continues to work — he’s worked constantly in television since The Love Boat went off the air 30 years ago.

Kopell has been married three times. His second marriage was to Yolanda Veloz, daughter of the dance team of Yolanda and Veloz!