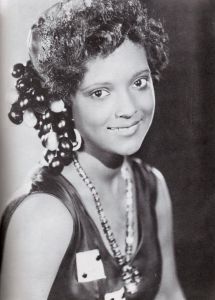 Originally from Lancaster, South Carolina, she moved to New York where her good looks, and singing and dancing ability got her stage work almost immediately. At only 16 she was in the chorus of Blackbirds of 1928, starring Bill “Bojangles” Robinson and Adelaide Hall. This brought her to the attention of King Vidor, who gave her a principal role as the seductress “Chick” in his seminal all-Black musical film Hallelujah (1929). This is when a critic dubbed her “The Black Garbo.”

This rapid success had to have seemed too easy — and it was.  Critically acclaimed as Hallelujah was, it was a bit of an anomaly at the time. Though McKinney was signed to a contract by MGM (the first African American actress to get to do so with a major studio, just as she had been the first to land a principal role in a Hollywood film), the studio didn’t have many roles for her. This was an age when the studios were not telling African American stories, or even allowing African Americans significant roles WITHIN stories.

Still McKinney must have had enormous grit and determination, for she worked prettily steadily for another two decades. She’s in the musical short Manhattan Serenade (1929) with Raymond Hackett and the Brox Sisters. She sings a number in Van and Schenck’s 1930 feature They Learned About Women. William Wellman cast her in his crime film Safe in Hell (1931), which was set on a Caribbean island. The musical short Pie, Pie, Blackbird (1932) put her on a bill with Eubie Blake and the Nicholas Brothers. Blood Money (1933) was Judith Anderson’s first film, and featured Blossom Seeley, but McKinney was relegated to a walk-on part as a maid.

Meanwhile McKinney returned to Broadway for a featured turn in Ballyhoo of 1932. This led to an exciting period as a live entertainer. She went to Paris in December 1932, where she performed in cabarets like Chez Florence. In February 1933 she starred in a London revue called Chocolate and Cream. This led to British films. She had an uncredited turn in the musical Kentucky Minstrels (1934), but got terrific reviews. Following this she was given 3rd billing in Sanders of the River (1935) opposite Paul Robeson. While in London, she also sang on radio,and appeared in some very early experimental tv productions.

At the same time, she managed to do some work in Hollywood. As World War Two drew closer, she moved back permanently, appearing in films pretty much as before. In Reckless (1935) with William Powell and Jean Harlow she is a nightclub singer. She gets star billing in the all-black musical short The Black Network (1936) with the Nicholas Brothers, Amanda Randolph and others. Race films kept her going for a time. She got star billing in Gang Smashers (1938) and the zombie film The Devil’s Daughter (1939). Then came the music short Swannee Showboat (1940) with Pigmeat Markham.

The forties were leaner times for McKinney. She had walk-ons as maids in four successive films: Dark Waters (1944), Together Again (1944), The Power of the Whistler (1945), and Night Train to Memphis (1946). She gets decent billing as herself in the Mantan Moreland comedy Mantan Messes Up (1946), with Buck and Bubbles and others. She has a decent role in Elia Kazan’s pathbreaking Pinky (1949) with Jeanne Craine, Ethel Waters and Ethel Barrymore. Her last film part was as an uncredited extra in the western Copper Canyon (1950). Her last stage role was as Sadie Thompson in a summer stock production of Rain in 1951.

After this she appears to have lived for a while in Athens (Greece, not Georgia), where she had previously spent some time in the ’30s. She spent her last years in New York City. Nina Mae McKinney died of a heart attack in 1967 at the age of 54.