With the Coney Island summer season now imminently underway we thought it a good time to do a post on a pair of men who penned a once-famous musical comedy on the fabled destination, the team of Mathews and Bulger. For a very brief time they were at the top of show business, at the sort of level at which he you might mention Harrigan and Hart, Weber and Fields or Williams and Walker. Their fame outlasted the actual life of the team, by at least a couple of decades but hasn’t reached down to our day by a long shot. I really had to do some digging to assemble the pieces for even this incomplete portrait.

J. Sherrie Mathews (James Sheridan Mathers, 1869-1921) has been called the senior member of the team. There are endless variations on the spelling of his name, his nickname sometimes rendered as “Sherry” or Sherre”, and his last named sometimes rendered as “Matthews”. We use the most common spellings for both in this post. His longer-lived partner was Harry Bulger (c. 1872-1926). A 1907 publication called The Actors’ Birthday Book  tell us that Bulger was from Janesville, Wisconsin. A 1909 issue of Everybody’s Magazine says that both he and Mathews were from the same Ohio town, where Mathews was a barber and Bulger drove a delivery wagon and both sang with a local quartet. The Wisconsin origin sounds more true to me; the latter explanation is more vague and sounds like puffery, and other details from The Actors’ Birthday Book seem to pan out.

Bulger seems to have gotten his start as one of the original members of Al G. Fields’ Minstrels in 1886 as part of a team called Bulgers and Jenkins. At this point Bulger was still a teenager. The teaming with Mathews was not long after this. Mathews and Bulger appear to have passed rapidly enough through the vaudeville ranks. By 1891 they had played Tony Pastor’s in New York, at that time vaudeville’s most prestigious venue. They also co-authored and published a song that year, called “Hey Rube, or A Day at the Circus”. The following year they were stars with the Henry Burlesque Company at Niblo’s Garden. In 1894 they played the Casino Theatre Roof Garden. They are said to have appeared in Charles H. Hoyt’s A Milk White Flag, which premiered in 1894. But by 1893 they also seem to have had established a vaudeville farce company of their own, which played the Olympic Theatre in Harlem, and Miner’s Bowery and Eighth Avenue theatres

In 1896, they premiered their own original farce At Gay Coney Island (1896), and this was of course what brought the team to my attention. Research Coney Island enough and you will inevitably hit references to this show. There is MUCH lithographic advertising material for the team’s original productions extant, indicating a significant advertising outlay, one that seems to have paid off. The book to this “polite play”, elsewhere described as a musical farce, was by Levin C. Tees. The play seems to have opened in Hoboken, then come to New York’s Columbus Theatre in February of 1907. The name of the venue comes to me in a New York Clipper annual, though I’m finding very few references to that theatre, which must have been quickly renamed. The production does not appear on IBDB, indicating that it wasn’t located in what is now considered the theatre district.

A couple of years later (1899) they opened By the Sad Sea Waves at the Herald Square Theatre. The team co-wrote the libretto and songs, and starred in the show. It also featured Rose Melville, Ned Wayburn and his wife Agnes, a former Floradora Girl. Billed as “a ragtime opera”, the show was set at the fictional “Finishville Habit-Cure Sanitarium”, which would soon prove sadly ironic.

The title of the show comes from a popular song circa 1850 with music by Julius Benedict and words by J.L. Lambert. This song was sung and popularized by Jenny Lind on her famous American tour, during which Benedict was her accompanist. It was a really popular song, it was widely distributed in sheet music form. It was popular enough a cultural reference that the phrase “by the sad sea waves” was often used as a humorous caption for cartoons, in apparent mockery of the song’s maudlin content. It remained a point of cultural reference as late as 1917 when it was used as the title of a silent comedy film by Harold Lloyd. 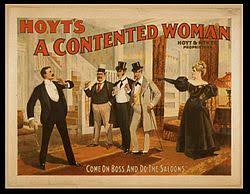 After their big Broadway success, the team went on tour. In the summer of 1900 they appeared in San Francisco in Hoyt’s A Contented Woman featuring an Australian actress named Norma Whalley in the title role. Whalley had starred in the Broadway show The Man in the Moon the previous season. At any rate, this production proved to be the beginning of the end of Mathews and Bulger.

Mathews and Norma Whalley became an item and this drove a wedge in the team. By 1901 Mathews had married Whalley, and Mathews had broken with Bulger. That year Bulger starred in his next Broadway show The Night of the Fourth, which he had apparently developed with Mathews in San Francisco (the show features some of Mathews’ lyrics), but now Joe Coyne was his crosstalk partner and Matthews was out of the show. In any case the show seems to have been hastily devised to cover a gap in bookings. It was staged by Ned Wayburn, with a book by George Ade.

Ironically, Mathews’ marriage to Whalley would prove to be as short-lived as this show. His health immediately took a steep downturn. Broadway Weekly called his condition “paresis”, a symptom commonly associated with syphilis, a disease which afflicted many an actor of the day. By 1902 Mathews was permanently disabled by what other sources called a stroke. In 1904, Whalley divorced Mathews and married English aristocrat Sir Percival Clarke. She would later to go on to appear in numerous British films between 1920 and 1935. At the time of her divorce she claimed that Mathews had deceived her as to the state of his health (i.e., that he had syphilis, is what I read between the lines).  A Broadway Weekly columnist makes Whalley sound like a tempest in a teapot and a trouble-maker, but really, if Mathews did withhold the fact that he had syphilis, he’s the one at fault in this marital conflict. Thanks to a relative, I learned that he died in late 1921, and is buried next to his mother in Mattoon, Illinois, and two of his brothers, Albert and Ezra were also in show business.

Bulger on the other hand, went on to considerable success on his own. Perhaps he was not a household word (he was almost invariably referred to in the context of the glory days with Mathews) but he worked constantly for another two decades in musical comedies and vaudeville. Much like Eddie Foy, many of his shows of this period were of the extravaganza sort. Immediately after the break-up he had an intense five year period of Broadway activity, with the shows The King’s Carnival (1901), The Sleeping Beauty and the Beast (1901-02), Mother Goose (1903-04), Woodland (1904-05), When We Were Forty One (1905), and The Man from Now (1906). A couple of these shows featured his own original songs.

It was another decade until his next Broadway appearance, but he toured heavily with similar musical shows, and with solo appearances on the vaudeville circuits. Shows he appeared in regionally included Noah’s Ark (1907), Algeria (1908), and The Dairy Maids (1908).

That ‘s him on the lower right hand corner of this 1910 sheet music. He’d filled out some over the decade.

Apparently, Bulger was also known for his drag comedy! In his book, Vaudeville from Honky Tonks to the Palace,  Joe Laurie Jr said that Bulger was known for “a blond soubrette number”. This may perhaps illuminate the titles of  two songs he published and performed in 1911, “My Heart’s Bouquet” and “What Us Poor Girls Go Through”.

In 1912, Bulger toured for a whole year with a show called The Flirting Princess by midwest impresario Mort Singer. Then he went back into vaudeville, under Singer’s direction.

In 1913 Bulger’s wife Queenie made the headlines when she was arrested for angrily jabbing a bootblack with a hatpin!

Bulger was in two more Broadway shows in the teens, The Cohan Revue of 1916, and The Highwayman (1917). There are mentions of his performances in the press well into the 1920s.

In mid 1925 Variety reported that Bulger was confined to his Princeton hotel, having suffered a “stroke of apoplexy”, said to have been his second. His right side was totally paralyzed. His wife was also ill due to the constant strain of caring for him around the clock. She was said to be suffering from “a nervous breakdown”. The pair were shortly later to moved to St Vincent’s Hospital in New York and then to the now long defunct French Hospital, on 34th Street. The wife died soon after that. Bulger never recovered. He died in 1926. Do the math–he was only 54!

There was also a Harry Bulger Jr, who was also in show business and appeared with his father on Broadway in The Highwayman.  A decade later (around the time his father died) the younger Bulger appeared in the play The Noose, a production that is chiefly remembered today for giving the world Barbara Stanwyck and Mae Clarke.

To learn more more about vaudeville and teams like Mathews and Bulger, consult No Applause, Just Throw Money: The Book That Made Vaudeville Famous.