Creighton Hale: Not the Goat Man 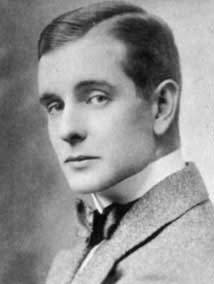 Born Patrick Fitzgerald in County Cork, Ireland he moved to America early in the 20th century with a touring theatrical troupe. His first Broadway show was Indian Summer (1913), produced by Charles Frohman. By the following year he had already broken into films. Only one more Broadway play followed, Moloch (1915).

Hale’s rise in films was rapid enough that a return to the stage was neither sought nor desired. He was in the Exploits of Elaine serials with Pearl White (1914-15), Three of Us (1914), with Mabel Taliaferro, the 1916 adaptation of Steele Mackaye’s Hazel Kirke, Charity (1916) with Linda Arvidson (D.W. Griffith’s wife), the original version of The Thirteenth Chair, Griffith’s Way Down East (1920) and Orphans of the Storm (1921), Trilby (1923), and The Cat and the Canary (1927) among dozens of other successful films.

He was able to ride out the transition to sound for a couple of years, e.g., he’s in the first screen adaptation of Philip Barry’s Holiday (1930). But then came a decline. Hale’s in a few Hal Roach Our Gang shorts, but mostly he became a bit player and extra, often unbilled. His last role was “Irritated Stagecoach Passenger” in the Boetticher-Scott western Westbound (1959).