Why Don Rickles Was Not an Insult Comic

For someone whose stage character was so prickly, it is awe-inspiring to observe how beloved Rickles was. Nearly every comedian of note adored him, not just because he was a sweetheart of a guy offstage, but because he excelled at what they themselves always aspired to do. At the human level, he was a master of making people laugh spontaneously and in the moment. Where he truly shone and became legendary was in live performance, or in various kinds of variety television, either the Dean Martin celebrity roasts, or talk and variety shows like The Tonight Show, on which he appeared over 100 times. Like so many, I grew up watching him in these appearances. The excitement when his name was announced was palpable. People would stop what they were doing in order to watch him. Because, like chocolate, like Christmas, you know the experience would be intrinsically good. So comedians studied (and study) Rickles. I would say almost no one emulates him, insofar as stealing his character or doing his act, but they watch all his moves and try to draw lessons. 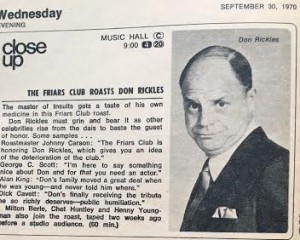 The broader public mischaracterizes Rickles, I think, by calling him an insult comic and making it about the things he said, the momentary quips that came out of his mouth. Not that none of that’s true, but believe it or not, it’s not the essence of his uniqueness. He was always adamant in insisting that he was not influenced by insult comic Jack E. Leonard, for example, and Leonard was an insult comic. It’s not that Rickles didn’t insult people; it’s that he wasn’t a comic. He wasn’t some hack with index cards full of “zingers” appropriate for any occasion. What he was, and how he saw himself, was as an ACTOR. That’s what he studied to be, and that’s how he began his career, and always kept a hand in. He studied at the American Academy of Dramatic Art, and began getting small roles in film and in tv in the mid ’50s. But not enough of them. So he took to the stand-up stage and vented there. And what he did on stage was give acting performances, beautiful, epic improv sets, where he worked a room and interacted with people, teased them, played with them. It was not about WHAT he said, but about the human interaction. It’s instructive to watch him during interview segments, when he’s “on the couch” with guys like Johnny Carson or Dick Cavett in shows from the ’60s or ’70s, because in that setting you can watch him shift gears between the earnest, shmoozy Vegas performer he really was and his character, “Don Rickles”, the perpetually, angry, aggressive, bad tempered attack monster. It was all about character. This, more than the landing of any particular put-downs (which were often way off the mark and beside the point) was the essence of Rickles. If you’re going to make it about wit, calling people “dummy” and “hockey puck” isn’t exactly the stuff of immortality. His performances, however, ARE.

Rickles made guest appearances on almost every sitcom going in his day and was in all the Frankie and Annette beach party movies, and starred in his own two sitcoms, The Don Rickles Show (1972) and C.P.O. Sharkey (1976-1978), but he always aspired to more. In his earlier years, he only got a handful of real acting parts,in movies like Run Silent, Run Deep (1958), X: The Man With the X-Ray Eyes (1963), and Kelly’s Heroes (1970). He expressed major disappointment that he was not cast in the all-star “comedian comedy” It’s a Mad, Mad, Mad, Mad World (1963), assuming that director Stanley Kramer must have concluded that he couldn’t act, whereas his acting chops may well have been better than those of many in the picture (surely he was a better actor than Buddy Hackett!). Rickles’ younger fans knew this about him so, rather late in life, he began to get some more acting opportunities, enjoying rather a good stretch in the ’90s: there’s the 1990 Tales from the Crypt episode The Ventriloquist’s Dummy, directed by Richard Donner; John Landis’s Innocent Blood (1992); the 1993 Richard Lewis sitcom Daddy Dearest, in which Rickles played Lewis’s father; Martin Scorsese’s Casino (1995); the Pixar Toy Story movies (1995-2014), in which he voiced Mr. Potato Head; and Bob Saget’s Dirty Work (1998) starring Norm MacDonald. In 2007 (the same year Rickles’ memoir came out) Landis paid tribute to him with the HBO documentary Mr. Warmth: The Don Rickles Project.

And Rickles KEPT GOING. He was a familiar, beloved sight on talk shows until the year he died, 2017! In his last months he even did one last video series, Dinner with Don, a series of conversations with top contemporary comedians and other performers. The episodes are all on Youtube. You should watch them now, dummy!