I’m in the New “Smithsonian” on the Subject of Don, the Talking Dog 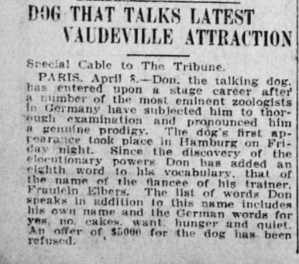 I’ve been holding this post on Don the Talking Dog so it could coincide with the new edition of Smithsonian, which features an article on same in which I am quoted. The canine prodigy in question was a setter from Theerhutte, Germany, near Hamburg. Born in 1905, he was trained by his owner, a gamekeeper named Martin Eber, who taught him to do something that at least sounded like talking (in German, of course). In time Don was discovered by circus impresario Karl Hallenbeck, who began presenting him.

By 1912 he had come all the way the the U.S., where he was presented in major vaudeville venues like Hammerstein’s Victoria. In 1913 he returned and a publicity stunt was staged wherein Don “saved” a drowning victim in the waters off Brighton Beach. For the whole story, read Greg Daugherty’s excellent Smithsonian article here.

And the original interview is below:

I don’t think I mentioned him in No Applause — the phenomenon of Don the Talking Dog was very brief! And he’s very well represented in articles elsewhere on the internet, so I haven’t done an entry on him on Travalanche to date.  In future, I may do one about the overall phenomenon of talking dogs, in general, for (as Youtube attests) it persists to this day!

One reason is that he was very heavily hyped by the Hammersteins in the grand old P.T. Barnum tradition, lots of advertising, lots of fanfare, press events and the like (reporters actually met his boat when it arrived from Germany). Much as in the days of Barnum, audiences flock to such affairs much more out of skepticism or amusement or curiosity than out of actual credulity (I’ll address credulity in your question below). So there’s that. Here’s another aspect few people may have thought of: New York was heavily German in the pre-World War One years. The Germans were the immigrant group second only to the Irish here, and they were comparable in size and in “cultural presence”. Too bad there’s no demographic data about the Hammerstein audiences, although there may be some anecdotes to dig up — I wouldn’t be shocked to hear that many German-Americans went out to see their canine countryman utter a few words of their native language out of sheer patriotism and nostalgia!

Well, he was always at Hammerstein’s talking over a lot of acts, and audiences loved him, sure. But with an act like this, I think most anybody can successfully play straight man to a “talking” pooch. You know the old theatrical adage — dogs always upstage humans.

Believe it or not, I honestly think that whether a dog “talks” is kind of a grey area. There’s all this recent research that seems to indicate that apes, dolphins,  and certain birds like crows and parrots may understand speech and be able to use it a limited extent. As people often say about dogs, they are “almost human”. I’ve read somewhere that they’re roughly as smart as human toddlers of 2 or 3 years old. I just went and played a bunch of Youtube videos, and you watch dogs whose owners claim they can “talk” , and often the animals do get the cadence and music of human speech quite accurately, although they cannot articulate. And you watch them — I believe they are communicating on some level even if they are doing so without much comprehension that we would recognize as thought. They are clearly “trying to talk”. To that limited extent, it can be said that talking talks really are “talking”.  Some of them sound quite real, and I’m guessing this was very much the case with Don, probably extraordinarily so, hence his fame.

That said, when we get to complete CREDULITY, i.e., believing that the dogs “said” something, I think that would be an element of wishful thinking, making people believe they hear what they’ve been told the animal is saying. As far as that goes, only small children and very simple, uneducated adults might “go there”. This was before universal education, and there was certainly a larger percentage of adults who were illiterate, had only known farm work or manual labor, and these were certainly a major part of the vaudeville audience. That said, Hammerstein’s was the top ticket in vaudeville at the time. I think the kind of people I’m describing would be less likely to shell out for a Hammerstein’s ticket. In the case of that venue, mostly children would be the believers. Most others would just regard it a charming and funny trick.  But certainly, back in Germany, where the audience was mainly local rustics, there would be many believers!

I’m not aware of others. The two related acts I can think of are Charlie Prelle, who made his dogs talk through ventriloquism, and Al Mardo, a comedian who would CLAIM his dog would talk, but the dog would proceed to do nothing but lie there. I imagine there were others that I’m not aware of.  As for professional talking dogs today, I’m not aware of any, but that doesn’t mean there aren’t. I just found plenty of amateurs on Youtube though!