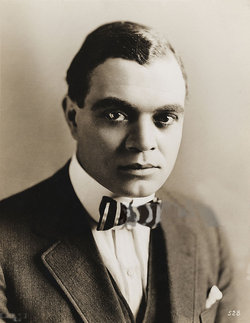 I have my own unique tickler system that tells me whom to write about every day. Today, when I saw “Noble Johnson” (1881-1978), I was like, “Surely I have already written about him?” But, no. I had written about Noble Sissle, and about J. Rosamond Johnson and also Charlie Johnson, Jack Johnson, Bunk Johnson and Robert Johnson. Close, right?

But Noble Johnson is just as distinguished in his own field. He was a character actor in cinema, notable for being one of the few African Americans in the field during the studio era. And he worked constantly.  Originally from Missouri, his family moved to Colorado Springs when he was a child. It was there that he met and befriended Lon Chaney when still a boy. Chaney broke into films in 1912; Johnson followed him into the industry three years later, appearing in the Lubin film Mr. Carlson of Arizona. He was an extra in D.W. Griffith’s Intolerance (1916) as a Babylonian soldier. Because of his large size 6’2″, 215 lbs, Johnson was often cast in key roles among supernumeraries (e.g., tribal chieftains and the like) in serials, horror movies and the like. Over the course of his career, he played not only Africans and African Americans, but Native Americans, Asians (ranging from Chinese to East Indians), Arabians, and Pacific Islanders. All stereotypes by the modern standard, of course. 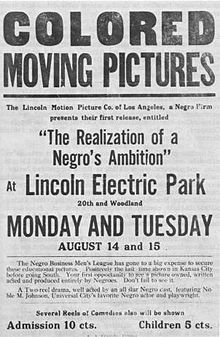 In 1916, Johnson made what may have been his biggest historical mark in co-founding the Lincoln Motion Picture Company, the first American studio whose mission was to produce “race” films, i.e. pictures for African Americans. Johnson was the company’s President. In its seven year history the company produced several movies, including The Realization of a Negro’s Ambition (1916), Trooper of Company K (1917), The Law of Nature (1917), A Man’s Duty (1919), By Right of Duty (1921). The Heart of a Negro was in production when the company folded in 1923.