Charles Busch and “The Confession of Lily Dare” 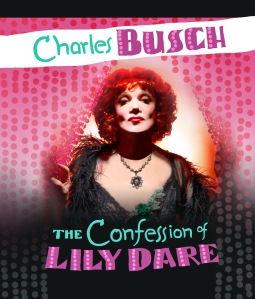 Well, I couldn’t let the anniversary of the San Francisco Earthquake (112 years ago today) pass without brief word of praise about The Confession of Lily Dare, Charles Busch’s new play at Theater for the New City. For you see, his new comedy has a Barbary Coast/ San Francisco setting, with a crucial scene set on that fateful day. As you might expect, he draws copiously from the 1936 movie San Francisco for the new parody, along with countless Pre-Code melodramas about selfless women of sin who let a childless rich couple raise her infant so her offspring can lead a better life (there are so many movies with THAT plot there’s too many to list).

Busch is the title character of course, who emerges as a naive teenager fresh from a Swiss convent, inheriting her aunt’s cat-house. Circumstances (and a conniving man) get her all soiled and sullied, turning her into a saloon singer, then a madam, and finally a convict when she is framed for murder. Busch, as always, is priceless in every thought, word and deed and this time out he has a particularly solid company supporting him, including the perennial Busch veteran Jennifer Van Dyck (a particular hoot in this one); Nancy Anderson (who brings a sort of Penny Singleton/ Ann Sothern quality), Howard McGillin (Phantom of the Opera); the Protean Christopher Borg (whom we loved in Judith in Bethulia), and Kendal Sparks as the faithful piano man. Special kudos to Tom Judson for penning the hilarious song “Pirate Joe”. And Busch of course channels everyone from Mae West to Bette Davis to Hayley Mills. It plays through the end of the month though I understand it’s sold out, as it well ought to be. Still, you could give it a try. More on the show here.

My Chelsea Now editor Scott Stiffler did this terrific interview with Busch a couple of weeks ago. Read it here.