Czech American director Milos Forman died today at the age of 86. The Eastern Bloc, much as Nazi Germany had before it, inadvertently enriched American culture by causing its great artists to flee to our shores. Forman was already negotiating his first American film when the crackdown in the wake of the 1968 Prague Spring caused him to move here. (Thanks, reader Terrance J. Reilly, who wrote to tell me that among the project’s Forman was initially considering were an adaptation of Kafka’s Amerika, and one with Jimmy Durante as a wealthy bear hunter!)

Being of a certain age, I grew up watching Forman’s films. With the exception of his first one Taking Off (1971, which I am DYING to see), I have seen all of his U.S. films, including the Spanish co-production Goya’s Ghosts (2006). Most of them I saw in the cinema during their initial release. [Addendum: Thanks to reader James Bigwood, I got to see Taking Off recently. It is duly AMAZING.]

Most of the headlines today are privileging One Flew Over the Cuckoo’s Nest (1975), but (it may not surprise you to learn) I have come to regard Ragtime (1981) as my personal Forman favorite, with its careful reconstruction of America in the early 20th century. An immigrant himself, Forman had a perspective on the country different from most native-born ingrates, who are much more likely to take this country for granted. Forman’s most patriotic American film is definitely The People vs. Larry Flint (1996). This will either be obvious to you, or it won’t. Freedom is a precious thing — the most precious thing in the world. Forman lost his parents to the Nazis and grew up behind an Iron Curtain. He appreciated America’s constitutions in a way that many Americans plainly don’t. Just look at the other headlines today.

While Forman shot and assembled movies beautifully, my first thought is that his strongest suit was working with actors, building great comic ensembles of performers skilled enough to be as touching as they were funny. The casts of his films are not to be believed: Taking Off (1971) has Buck Henry,Lynn Carlin, his frequent collaborator Vincent Schiavelli, and three people who were about to become sitcom stars: Georgia Engel (The Mary Tyler Moore Show), Audra Linley (Three’s Company, The Ropers) and Paul Benedict (The Jeffersons). Cuckoo’s Nest has: Jack Nicholson, Louise Fletcher, Brad Dourif, Schiavelli, and Danny Devito and Christopher Lloyd, both about to become stars on Taxi. Ragtime has James Olson, Elizabeth McGovern, Moses Gunn, Debbie Allen, Mandy Patinkin, Mary Steenburgen, Dourif again, and the stuntcasting of people like James Cagney, Donald O’Connor and Norman Mailer.

And then, something extraordinary — the manner in which Forman brought out the best in individual performers. Very often, nearly invariably, the performances given by actors in his films are thought of either as their best, most signature role, or a kind of turning point, the role that caused their career to reach new heights. Jack Nicholson, who’d only begun to break through into the mainstream the year before in Chinatown, won a best Actor Oscar. Louise Fletcher won Best Actress, and Ratched is the role she is forever most associated with. Tom Hulce in Amadeus (1984), and F. Murray Abraham winning his Oscar in the same film. Larry Flint is the movie where we stopped thinking of Woody Harrelson as a star of Cheers and started to think of him as a movie actor; and got an Oscar nominated performance out of Courtney Love on the same film. Jim Carrey was permanently altered by his experience of playing Andy Kaufman in Man on the Moon (1999) — he fancies himself some sort of Holy Man nowadays.

It’s not all skittles and beer. My wife’s take on Cuckoo’s Nest is “Why is Nurse Ratched a villain? What is she supposed to do, let mental patients run amok through the streets?” My response is that Kesey’s story is not to be taken literally, the predicament of the characters is existential, we’re all locked up in an asylum. But the fact that that doesn’t come across in the film, I think, is a flaw in Forman’s approach. He chose to be literal about it. The book was told from the Chief’s perspective, a mental patient who keeps going in and out of a fog caused by drugs and electro-shock therapy. The film takes a much more straightforward, traditional narrative approach, which may be popular with movie-goers but is much too facile to do the story justice. Cuckoo’s Nest would have been a much better film if it had been made in the ’60s instead of the ’70s. As would have Hair (1979), my least favorite Forman film by like a mile.

But today’s a day to celebrate his track record of great work, of which there was a lot. And like I said, Ragtime is my favorite Forman film — I’m bound to write some more on that topic sometime.

The Vikings sent their dead off to Valhalla on a boat. Today, perhaps Mr. Forman is with these guys: 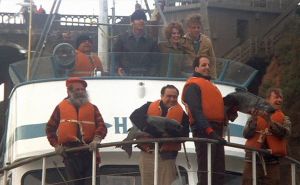