The Day That Norman Fell 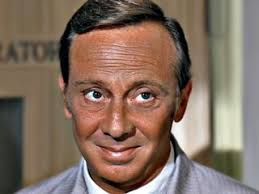 Unlike most everybody, I imagine, when I think of Norman Fell (Norman Feld, 1924-1998) my first thought is not of his most famous role, that of the dirty-minded, nosy landlord Mr. Roper on Three’s Company and The Ropers, a role he played from 1976 through 1981. Instead, I think of the career that led up to that role, the hundred guest shots and walk-ons he had as a character actor, usually as a kind of irritated, put-upon complainer of some sort, exhausted detectives, angry neighbors, and stuff like that. That instantly recognizable face, which always somehow looked like he’d just eaten a lemon, was in numerous classic movies and tv shows prior to Three’s Company.

While Fell seemed the quintessential New Yorker, he was actually from Philly. An Actors Studio alumnus, his tv credits go all the way back to the mid 1950s. But Fell was one of those guys whom middle-age suited best. He’s in the original Ocean’s 11 (1960) as one of the titular 11. Like the characters in that film, Fell was an actual World War II combat vet, and had often played soldiers in film and tv. When I picture him, it’s usually from this period, wearing one of those Kennedy era, Rat Pack kind of straw golf hats. Interestingly, he is one of the few people in It’s a Mad, Mad, Mad, Mad World (1963) who wasn’t at the time a famous comedian (he plays the plainclothesman who reports back to Spencer Tracy that Jimmy Durante has died — a part he got because he was a quintessential tv cop, as opposed to a comic.) He’s in Ronald Reagan’s last starring vehicle The Killers (1964). He’s Dustin Hoffman’s suspicious landlord in The Graduate (1967), a role that definitely feels like foreshadowing for Three’s Company. He’s Steve McQueen’s police captain in Bullitt (1968). In 1970 he’s in both Catch-22 and The Boatniks, which would make a pretty mind-bending double feature. (Mike Nichols, director of both The Graduate and Catch-22, must have been fond of Fell’s work). He’s got a great turn in Airport 1975 as one of a trio of drunken businessmen (the other two are Jerry Stiller and Conrad Janis). In 1975 came perhaps his biggest film role, that of Tamara Dobson’s CIA chief in Cleopatra Jones and the Casino of Gold. He’s also in the 1978 tv movie Rabbit Test, written and directed by Joan Rivers, and starring Billy Crystal.

After he left Three Company, Fell continued acting right up until he died, and you can see him on shows like Matlock, Magnum P.I. and Murder She Wrote. A couple of his last performances, on Fresh Prince of Bel-Air (1994), and Ellen (1997) were comical nods to his past as Mr. Roper. The Ellen shot was his final acting credit. Bone marrow cancer took his life in 1998.