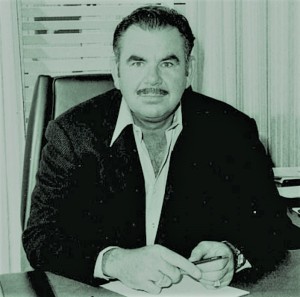 But already we do him an injustice. Meyer is best known, perhaps virtually only known for his obsession with a certain part of the female anatomy, and that is definitely a part of who he is. But it’s far from all or even most of what he is as an artist. To put it in absolutely analogous perspective: cartoonist R. Crumb happens to be obsessed with women’s butts, but he’s got a hundredfold more going on in his work than that. And such is the case with the films of Russ Meyer. A brilliant photographer/cameraman/cinematographer/director, a sharp satirist, an entertaining writer…his films add up to something eloquent about America as observed from the kookiest fringes. The general public’s take on Meyer has it precisely backwards. It always goes something like this: “Haha, Roger Ebert was supposed to be this hotshot critic but then he made these terrible movies with Russ Meyer!” Nope. Ebert was a highly intelligent and discerning critic. And he admired Meyer’s work. So the only really logical thing to do is flip the received notion and say, “I trust Ebert’s judgment in general. Russ Meyer’s work must have something, probably a lot, to commend it.” It does.  And John Waters (whom I greatly admire) cites Meyer as a major influence, as well. (We’ll get to that glorious collaboration with Ebert in a bit)

Originally from the greater San Francisco area, Meyer was a combat camera man in World War Two. In the post-war years he made industrials, took publicity stills for the Hollywood studios, and worked as a pin-up and glamour photographer. 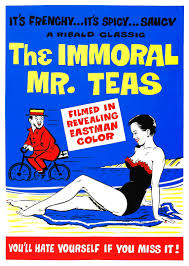 In 1959 he got together the funds for his first feature, the low-budget The Immoral Mr. Teas (1959), which made back something like 70 times its investment. It’s known as the first non-pornographic American movie to feature nudity, and its market and promotion was definitely all about exploitation, but there is much more to it than that. The film is gorgeously shot and extremely witty. One of Meyer’s old army buddies, whose name actually WAS Mr. Teas, is a dude in a boater hat who rides a bicycle around selling dental products to dentists. Along the way he ends up huffing gas and seeing naked women. Because the film is shot MOS, with a merry soundtrack of European inflected jazz (accordion, electric guitar, sax), it kind of reminds me of a Jacques Tati movie (the boat and bicycle especially reminding me of silent comedy). And the presence of nudity and the location shooting (rare in American theatrical movies at the time) make it feel like a European art film mixed with American nudie cuties and burlesque (he recruited a lot of his actress from strip clubs, and even shot a scene at one in Mr. Teas). The word “sleaze” is often used to describe Meyer’s films, but I’m SORRY. I grew up in the 1970s. I have seen actual porn. From the perspective of someone from my generation The Immoral Mr. Teas looks tasteful. (Although I was gratified to see a receptionist in one scene reading a copy of Jules Feiffer’s book Sick Sick Sick. Nothing was hipper in 1959.) Meyer had a distinct antisocial bent, a satirical take on mainstream society very much of a piece with his contemporaries Roger Corman and Charles B. Griffith. His films are subversive and self-aware, not “bad movies” but parodies of bad movies. The moralizing, nonsensical narration that graces nearly every Meyer film reminds me of the same device as employed by Ed Wood. But Wood was aspiring to genuinely echo the practice as employed in Hollywood films, television and radio. Meyer, by contrast, was only sending it up. 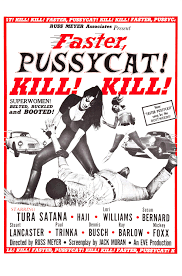 In the mid ’60s for a time, he exchanged color shooting for sync sound so he could add dialogue to his films, a wise move. During this period, he made some incredibly stylish, blood-pumping movies which remain among his most treasured, like Motorpsycho and Faster, Pussycat! Kill! Kill! (both 1965). Bikes! Race cars! Go-Go dancers! Leather! Stars like Tura Santana, Haji, and Lori Williams!  In these films you see Meyer’s clear influence on Quentin Tarantino, especially in films like Kill Bill and Grindhouse, not just the cheerful and stylishly shot mayhem and violence, but the strong (if psychotic and sadistic) female characters.

Next came his San Francisco strip club mockumentary Mondo Topless (1966), in which he returned to glorious color. At this stage Meyer began to push the limits of the permissible even farther, becoming more gratuitous with the nudie cutie element, even as he enhanced the satire, and borrowed shooting and storytelling techniques from the French New Wave and cinema verite. Having a performer named Babette Bardot helped cement the association. Many more similar films followed. Finders, Keepers, Lovers, Weepers (1970) is set in a topless go-go bar on L.A.’s Sunset Strip. Vixen! (1968) is about a nymphomaniac (Erica Gavin) who has sex with EVERYBODY including her own brother. Cherry, Harry and Raquel! (1970) is about a menage a troi, and was actor Charles Napier’s first film. Napier was the perfect Meyer actor — a sort of goofy-looking parody of the strong leading man type.

During the first half of the ’70s, mainstream Hollywood (which he’d first unsuccessfully tried to break into in the late 1940s) finally came calling, attracted by his daring aura, which was in tune with the times, and his box office success, if only at the independent level. The studio which signed him was Fox, which also released Robert Altman’s M*A*S*H that year. They were clearly into taking big, splashy risks during this period. The results, as would happen with Roger Corman and John Waters when they got similar opportunities, were not ideal from a business perspective. But in the case of Meyer, it resulted in his best and probably best known film. Beyond the Valley of the Dolls (1970) originated as a straight up sequel to Jacquelyn Susann’s 1967 trashy (and unintentionally campy) soap opera. Meyer wound up collaborating with film critic Roger Ebert on a screenplay that was anything but straight, an over-the-top, explosive orgy of camp, and a rock musical to boot, with a trans character, lesbianism, decapitation, LSD freak-outs and that’s just the tip of the iceberg. I’ll be blogging much more about this film at some point because it’s one of my favorite movies. (I have blogged about some of its stars thus far though: Dolly Read, Cynthia Myers, and Edy Williams. ). Despite the film’s X rating, it did make a ton of money at the box office.

Where to go from here? Next, Meyer experimented with a relatively “legit” film (1972), a courtroom drama called The Seven Minutes (granted it’s a legit film about obscenity and rape). In addition to many in the Meyer stock company, there are Hollywood stars in it: Yvonne de Carlo, John Carradine, Jay C. Flippen and a very young Tom Selleck and Wolfman Jack!

The Seven Minutes didn’t do so well, so Meyer reverted to form. In 1973, he released Black Snake, a blaxploitation film set in the Caribbean during slavery times (his second period piece after Fanny Hill).

Then came late period Russ Meyers, and this might be the Russ Meyer that made the biggest impression, the one we walk around with in our heads, because it is so unique, bizarre, and not for everybody. This is the period of Supervixens (1975), Up! (1976) and Beneath the Valley of the Ultra Vixens (1979). These are the movies in which, Meyer, already humorously concerned with women’s breasts throughout his career, started presenting films starring women with mammaries of grotesque, record-setting size, literally on the scale of watermelons. The films now become skin flick as freak show, and that is the appropriate word: freak show. It’s really not my thing (in fact, whose thing IS it?) but even here I find something characteristically, even deceptively witty about it. Think about it this way. You’re in the exploitation game. And by the mid 1970s there is a full-on pornography industry in full bloom. Times Square has fallen to it, like Rome fell to the German Invaders. Entire cinemas are devoted to movies that are nothing but graphic depictions of people screwing. And you’re from an earlier time, a time when a glimpse of a topless girl playing volleyball on the beach was enough to send men into orbit. What do you do? What is your way of competing? What is significant is what Meyer doesn’t do. He doesn’t go in the direction of extreme porn. He doesn’t compete in that way, on those terms. Conceivably he might have. He’d always ruffled feathers by showing people having sexual intercourse, but it had always been tasteful in the manner of the European art film. Instead, hilariously, and may I say, satirically, he competes by increasing the SIZE of the breasts in his films, and advertising that. Isn’t that American? The land of the biggest cars, the biggest skyscrapers (at least back then), the biggest everything? An exploitation movie with the biggest hooters. As though size were a virtue unto itself. The only thing he could have done more is make them Godzilla sized. This, I think, is a detail that put his entire body of work in perspective. It’s not just about sex. If it were just about sex, it would just be about sex. It’s about an artist’s unique view of the world, one that is sexy, funny, and imbued with style and wit.

One other project worth noting. In 1978 Meyer and Ebert were hired to make Who Killed Bambi? which was calculated by Malcolm McLaren to be the Hard Days Night for the Sex Pistols. But Fox pulled the plug very early in the shooting. It’s a shame, it would have been epic. It has become notorious as a “What if” for many years anyway.

In the ’80s Meyer retired from film-making and began work on his three volume autobiography A Clean Breast, which was finally published in 2000. In 2001, although he was already struggling with Alzheimer’s, he pulled it together to make one last film, a mockumentary called Pandora Peaks after its titular star. See what I did there? I said TITULAR!