Edgar Buchanan: Holding a Dental Mirror Up to Nature

Three cheers for one of my favorite western character actors Edgar Buchanan (1903-1979), whose birthday it is.

I just did something I have never done before: watched an episode of Petticoat Junction (1963-1970). I did it because Buchanan is undoubtedly most widely known for his role as Uncle Joe on that show, and on its fellow Paul Henning spawned cracker-barrel comedies The Beverly Hillbillies and Green Acres. I am fully conversant on the former show, and have seen several episodes of the latter, but had never watched Petticoat Junction. It was about what I expected (not a bad thing.)

What I do know Edgar Buchanan from is dozens, scores of movie westerns, including Shane (1953), Ride the High Country (1962), McLintock (1963), winding up with the Over-the-Hill Gang movies, and starting three decades earlier with Arizona (1940) with William Holden and Jean Arthur. And in 1956 he starred in his own tv series, Judge Roy Bean. Buchanan was so castable in westerns because he seemed so authentic. A lot of actors in westerns were kind of shoe-horned into the genre: they were too Hollywood or too Eastern or too urban or too phony. But having Edgar Buchanan in your movie would push it a long way in the direction of the real. He had a sort of gravelly, mush-mouthed voice, with the accent of a man who’d spent the first part of his boyhood in Missouri and the second part in Oregon. He was a westerner. He was not the leading man type, yet nor was he the comedy sidekick type, though he could be very funny in comic parts and moments. Guys like Gabby Hayes, Rosco Ates, Al St. John, etc were pretty much locked into their sidekick roles. They weren’t really thespians, they were just “characters”. But Edgar Buchanan could play a dramatic scene — he could be scary, or fed up, or worried,  or smart, or dumb, or whatever the scene required. So in westerns he played all sorts of characters: lawmen, doctors, farmers, storekeepers, newspaper editors, town drunks, peddlers, etc etc etc.

Furthermore, he was equally versatile in his facial hair — very important in a western. I’ll show you what I mean. He could go full bearded like Burl Ives:

He could go grizzled:

And he could go clean shaven:

Oh, and here’s one more, I almost forgot. He could also rock a ‘stache: 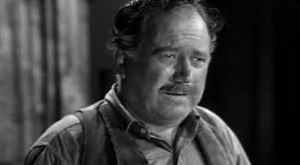 But while the look may have changed from time to time, that voice — always the same.

Now, we’ve gotten this far, and I’ve totally buried the lede. But that’s okay. I wanted to build some suspense. But here it is. The reason Buchanan was so authentic was that he was a real guy who fell into acting. In point of fact, he began his professional working life as a DENTIST. That is correct. He was a fully accredited DDS and so was his wife, whom he met in dental school. In 1939 they moved their joint dental practice from Eugene, Oregon to California. Buchanan got involved in the Pasadena Playhouse and started getting cast in movies practically right away. Maybe not coincidentally, one of his first screen roles was the part of a frontier dentist in Texas (1941).