The Miracle of Barney Martin 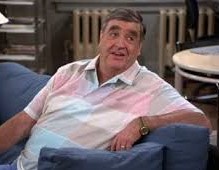 Character actor Barney Martin (1923-2005) was born on this day. When I learned the name of the face I knew so well, it made me laugh: could there be a more Barney-Martin-looking Barney Martin? The wild thing is, this manifestly ordinary looking guy is extraordinary insomuch as he was the rare untrained nonactor with acting talent. Many such people get cast in things for the sake of naturalism, and look “real”, but can’t cut it from the performance side. So ironically the real miracle of Barney Martin was not that he WAS real, but he had the knack for SEEMING real while turning in a great, professional performance. While his metier was comedy, he was terrific in dramatic roles as well.

An Irishman from Queens, Martin was a 20 year man in the NYPD and a full detective. But he had other aspirations. In 1955 he played a cop on The Phil Silvers Show (a supernumerary role). He’s an extra in Alfred Hitchcock’s The Wrong Man (1956). After a few years as an extra, in 1962 Martin’s position in show business began to improve when he was cast in the Broadway musical All American. That same year, he began working on Jackie Gleason’s American Scene Magazine playing bit parts, writing the occasional gag and acting as Gleason’s stand-in. In 1967, he was cast as Goring as the play-within-the-film in Mel Brooks’ The Producers. The following year, his first real film role, the part of Hank in Charly. He was funny in two episodes of The Odd Couple (1970, 1974), which led to him getting cast as a regular on The Tony Randall Show (1976-1978). But even more importantly, he got the key role of Amos Hart, Roxie’s schmucky husband in the original Broadway production of Chicago (1975-1977). He was in the hit movies Arthur (1981) and Arthur 2: On the Rocks (1988). And was a regular on the short-lived series Zorro and Son (1983), Sydney (1990), Life Goes On (1991-92), and Daddy Dearest (1993). But mostly the late 70s, 80s and 90s, were a tidal wave of guest appearances on all the major tv shows. He was best known for playing Seinfeld’s father Morty (1991-1998), a recurring role, but he was also on Happy Days, Barney Miller, Night Court, Murder She Wrote, etc etc etc. His last appearance was in a 2004 episode of the John Goodman series Center of the Universe.