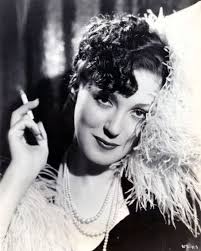 Today is the birthday of minor movie star Wini Shaw, often billed as Winfred Shaw (Winifred Lei Momi , 1907-1982). Shaw was of Hawaiian descent, the youngest of 13 children. She grew up in San Francisco, and began performing in parents’ vaudeville act when still a child. The act disbanded in 1920.

By age 23, she was in New York, where she as cast, in a brief revival of Ed Wynn’s Simple Simon in 1931. Three years later she was out in Hollywood starting her film career. She’s an extra in the 1934 romance Cross Country Cruise, her first film, directed by Eddie Buzzell, and starring Lew Ayres, June Knight, Alice White, and Eugene Pallette. She gets to use her vaudeville skills as a cabaret singer in the radio-themed Gift of Gab (1934) directed by Karl Freund, with Edmund Lowe, Gloria Stuart, Ruth Etting, Phil Baker, Ethel Waters, Paul Lukas, Victor Moore, Chester Morris, Alice White, June Knight, Boris Karloff, Bela Lugosi, Andy Devine, Sterling Holloway, Marion “Peanuts” Byron, Alexander Woollcott, Gus Arnheim and his Orchestra, Gene Austin (with Candy and Coco), the Downey Sisters, Billy Barty, Tammany Young, and three Three Stooges stand-ins (the actual Stooges were unavailable). And there’s more I didn’t feel like listing. That’s practically everyone on earth! No wonder Wini Shaw is in it.

Shaw made close to three dozen films in her brief career.  Her first actual acting role was in Million Dollar Ransom (1934), where she is fourth billed behind Phillips Holmes, Edward Arnold, and Mary Carlisle. Her two best remembered turns today were in 1935, in both cases they were stints as a singer. In Gold Diggers of 1935 she introduced the song “Lullaby of Broadway” and also sang “I’m Goin’ Shoppin’ with You” (the tunes were also released as a double sided single that year). Also that year she sang “The Lady in Red” in In Caliente, which features Dolores Del Rio, Leo Carrillo, Pat O’Brien, Glenda Farrell, Edward Everett Horton, the Dancing De Marcos, and Luis Alberni. (“The Lady in Red” has proved immortal in altered form — Bugs Bunny did his own version of it, “The Rabbit in Red”, in the 1944 Warner Brothers animated short Little Red Riding Rabbit.) Other notable pictures: she actually sings in blackface** in Al Jolson’s The Singing Kid (1936); she has a fairly good part in Satan Met a Lady (1936), the second screen adaptation of The Maltese Falcon, starring Warren William, Bette Davis, Alison Skipworth, and Arthur Treacher; and she’s in The Case of the Velvet Claw (1936), William’s last turn as Perry Mason. Her last film was Rhumba Land (1939), a musical/variety short in which she headlines a bill that also includes Vivien Fay, James Clemens, the Theodores, the Daryl Harpa Orchestra, and Alfredo Seville and the Singing Charros.

With little encouragement from Hollywood, Shaw retired from films, but continued great guns as a live performer. She spent the World War Two years touring in USO shows with Wynn and Jack Benny. After the war, she sang in New York nightclubs. She retired from performing in 1955.