The Four Phases of Robert Young

The career of film and television actor Robert Young (1907-1998) can neatly be divided into four phases:

I grew up during Young’s last two phases, when the mature Young was a living, contemporary presence. Because I discovered Young Robert Young belatedly, I’ll always have a teenager’s sophomoric amusement when I come across him in old movies. Compared with Old Robert Young, the Younger Young had a kind of bemused quality, as though he were constantly on the verge of delivering wisecracks. As a young man he’d done some acting at the Pasadena Playhouse, and some walk-ons in silent pictures. He became a contract player in 1931. Young’s Wiki entry does a terrible job of conveying Young’s early career, making him sound like rather a nobody. In reality, he was in numerous well known movies, including some that are classics. He made his debut in the 1931 Charlie Chan picture The Black Camel with Warner Oland and Bela Lugosi. Other notable ones: the Prohibition drama The Wet Parade (1932) with Myrna Loy, Walter Huston, Lewis Stone and Jimmy Durante; The Kid from Spain (1932) with Eddie Cantor; Eugene O’Neill’s Strange Interlude with Clark Gable and Norma Shearer; Today We Live (1932) directed by Howard Hawks from a Faulkner story and featuring Gary Cooper, Joan Crawford and Franchot Tone; Tugboat Annie (1933) with Marie Dressler and Wallace Beery; Alfred Hitchcock’s Secret Agent (1936) with Madeleine Carroll, John Gielgud and Peter Lorre; Honolulu (1949) with Eleanor Powell and George Burns and Gracie Allen; Maisie (1939) with Ann Sothern; Tod Browning’s last film Miracles for Sale (1939) with Florence Rice and Henry Hull; Northwest Passage (1940) with Spencer Tracy; Western Union (1941) with Randolph Scott; Sweet Rosie O’Grady (1943) with Betty Grable and Adolphe Menjou; The Canterville Ghost (1944) with Charles Laughton; and That Forsyte Woman (1949) with Greer Garson, Errol Flynn and Walter Pidgeon. His last from this period was Secret of the Incas (1954) with Charlton Heston, sometimes cited as an inspiration for Raiders of the Lost Ark.

The next phase of Young’s career was centered on his role as Jim Anderson in the quintessential American family sit com Father Knows Best. The radio version (1949-1954) overlapped with his waning movie career; the better remembered tv version ran from 1954 through 1960. The show was before my time; I first became aware of it when it was parodied on Saturday Night Live in the ’70s, with Bill Murray playing the Young role. While Leave it to Beaver has become the more oft-cited example of the “All-American white bread 1950s television sit com”, Father Knows Best is probably the most representative of the genre over all (after of course Ozzie and Harriet, although the fact that the Nelsons were all actually related and in the music business IRL gives the show a sort of meta fascination that Father Knows Best couldn’t possibly share). And while Leave it to Beaver’s Cleaver parents themselves were memorable as perfect WASPs, Leave It to Beaver overall had numerous clever and distinctive touches like teenage Wally’s slang-filled wisecracks, the two-faced brown-nosing Eddie Haskell, and Beaver himself, who had a Dennis the Menace-like penchant for getting into hot water. Father Knows Best was blander and even more idealized: insurance agent Jim Anderson and wife Margaret (Jane Wyatt) raise their three children Betty a.k.a “Princess” (Elinor Donahue), Bud (Billy Gray), and Kitten (Lauren Chapin). And that’s about it. They’re just a middle-class, middle West family. Whereas the radio version had some edge and the name of the show was intended somewhat ironically, for the tv version Young made it straighter and idealized. Unthinkably in today’s post-Roseanne-Simpsons-Married with Children-Family Guy culture, the title of the tv version of Father Knows Best meant what it said: Jim Anderson was an all-wise, all-knowing, all-loving patriarch. You might say, “How is that a show?” But I’ve seen episodes and it’s quite enjoyable and funny and so forth in a very gentle way. It’s when you stand back and see it context that you go, h’m, the imposition of a societal norm, and the absence of anyone remotely unlike these people is distasteful. It says a lot in what it doesn’t say. It offends by virtue of what it doesn’t include. At any rate, it was wildly popular in its day, and remained well-remembered long after its heyday. Today it’s considered a kind of bellwether of a time that loved to present itself as much simpler than it was.

Following Father Knows Best, Young attempted a new sit com called Window on Main Street (1961), which starred himself, a 13 year old Tim Mathieson, and Ford Rainey, a character actor whose work I got to know quite well because he was a member of the Trinity Repertory Company in Providence when I was growing up. I saw him onstage many times. But I’ve never seen Window on Main Street. It was cancelled after one season.

Okay, this is Robert Young as I first knew him.  Young played the kindly, quirky Santa Monica doctor Marcus Welby, who often butted heads with his younger, motorcycle riding partner Steve Kiley (James Brolin — this is totally where I first knew James Brolin from.) 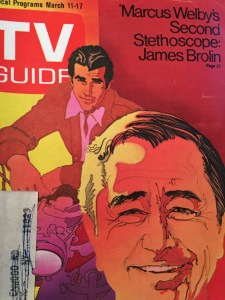 The other regular character was their receptionist Consuelo (Elena Verdugo).

After nearly a decade out of the limelight, Young now had a show that dealt with content that was anything but bland. Marcus Welby, M.D. was kind of groundbreaking in dealing with all kinds of racy problems: venereal disease, drug addiction, breast cancer, impotence, depression, rape, Alzheimer’s, etc etc. But it’s still Robert Young.

The show is kind of hilarious now in that Welby’s approach to solving these problems could be reactionary to say the least. I just found some hilarious clips on Youtube. In one he yells at an overweight teenage girl for eating too much and being too fat. In other one he spanks a hyperactive kid, telling the mother, “In time, you’ll learn to spank him too! He needs instant negative reinforcement!” And there were a couple of controversial episodes were Welby advocated “treating” homosexuality like some disease that could and should be eliminated with the right regimen of therapies. Between this and Father Knows Best, we begin to get a sense of a star whose programs would not have been disliked in Nazi Germany. (Hey! Look what I just found!:) 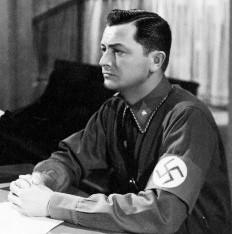 But, wait! There’s one more phase!

Following Marcus Welby, Young arguably became even more present in our lives as the shill for Sanka decaffeinated coffee. This was back when Sanka held a virtual monopoly on decaf. One used the brand name generically in the way we still use Kleenex, Xerox and Coke — the Holy Grail of marketing. These ads were everywhere, not just television and radio, but also print ads featuring Young’s likeness in magazines and newspapers. He was a perfect spokesman for the product. Much like Gertrude Berg, who hawked Sanka on her shows in the 1950s, his was a beloved, comforting, and trusted presence. At the same time, he was a senior citizen now, and older folks were a prime market for decaf — it’s easier on the old ticker. The commercials were much mocked and parodied by comedians at the time. The scenarios in the commercials would depict some social setting where a beverage might be served, and then Young would spring from out of nowhere and lay on the old Sanka pitch, often with a jar of it at the ready so he could display it to the camera. You must admit it, it would be very funny if someone did that in real life.

At any rate, I bet Young got lots of free Sanka as part of his endorsement deal, and it must have been good for him. He lived to the ripe, old age of 91.