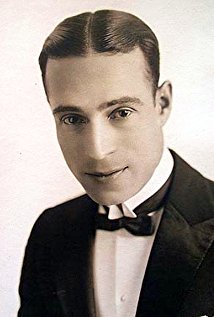 Milwaukee native Ben Bard (Benjamin Greenberg, 1893-1974) had one of show business’s most eclectic careers, with successes both in and out of the spotlight.

As a teenager, billed as B.D. Bard, he barnstormed the midwest with the Jolly Della Pringle stock company. In vaudeville, he played the Shubert Circuit as straight man to comedian Jack Pearl, and was Pearl’s comedy partner in two Broadway shows: The Dancing Girl (1923) and Topics of 1923 (1923-1924). In 1926, Bard, Pearl and Broadway performer Sascha Beamont performed some comedy bits in a Lee Deforest PhonoFilm (early sound experiment). Bard would later be reuinited with Pearl in the W.C. Fields-Chester Conklin comedy Two Flaming Youths (1927) and Pearl’s 1930 starring feature Meet the Baron.

In 1926, Bard signed as a contract player with Fox and began appearing in silent films, usually cast as a dashing, smooth villain in westerns and melodramas, and occasionally comedies. Cary Grant would make a similar journey, from vaudeville straight man to film actor, although Bard’s fame would never be as great as Grant’s. The first phase of Bard’s film career lasted until 1934, although in the talkie era his parts got much smaller, usually walk-ons, often uncredited. One of the more notable films from that period was The Bat Whispers (1930).

In 1929 he married fellow film actor Ruth Roland; they remained together until her death of cancer in 1937. Two years later he married Roma Clarisse.

In the mid ’30s he started Ben Bard Drama, which became one of the biggest and better respected acting schools in Hollywood, which was equipped with its theatre facility which produced stage classics and premieres of new plays. Over the years, the school’s distinguished alumni included Jack Carson, Angie Dickinson, Alan Ladd, Cliff Robertson, Shirley Temple, and Gig Young.

In 1943, Bard briefly resumed his film acting career, appearing in three Val Lewton horror films, The Seventh Victim, The Leopard Man, and The Ghost Ship. He appeared in one more film for RKO Youth Runs Wild the following year. His last film part was a walk-on as a bartender in the 1946 Universal noir classic Black Angel.

In 1947  Bard’s second wife Roma Clarisse passed away. In 1948 he married local television host and former child actress Jackie Lynn Taylor. The couple were together until 1954.

From 1956 through 1959 worked the head of the New Talent Department for Twentieth Century Fox, and then he went back to running Ben Bard Drama for his remaining years. He passed away in 1974.