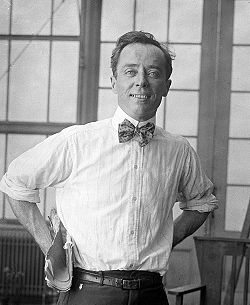 Herbert Brenon (1880-1958) was one of the most important Hollywood film directors of the silent era. Born in Dublin, he moved to London with his family when he was two years old (his father was writer and politician Edward St. John Brenon). He went on the stage, moved to America, and formed a vaudeville act with Helen Oberg, who became Mrs. Herbert Brenon, and appeared in some of his earliest films.

Like many in the silent era, he became a screen actor and director almost simultaneously, obtaining work at IMP (a Universal imprint) in 1912. By 1916, he had stopped acting. His most important credits (and many are very important) were behind the camera. His films include: Dr. Jekyll an Mr. Hyde (1913), Ivanhoe (1913), and Absinthe (1914), all starring King Baggott; Neptune’s Daughter (1914) with Annette Kellerman; Kreutzer Sonata (1915) with Nance O’Neil and Theda Bara; The Clemenceau Case (1915) also with Theda Bara; War Brides (1916) with Nazimova; the first version of The Lone Wolf (1917), with Bert Lytell and Hazel Dawn, later to have many screen, radio and tv incarnations; the definitive version of Peter Pan (1924); The Great Gatsby (1926); Beau Geste (1926) with Ronald Colman; and Laugh, Clown, Laugh (1928) with Lon Chaney and Loretta Young. He continued making films through the first decade of the sound era, none of them as distinguished as his silents. Wine, Women and Song (1933) with Lilyan Tashman and Lew Cody might be one of the better known ones. In 1934 he left Hollywood and returned to London, where he continued to make movies through 1940. In his three decades of directing, Brenon turned out over 100 films.

Though he died in Los Angeles, he is buried at Woodlawn Cemetery in the Bronx! I have visited his rather regal mausoleum; read about that junket here. And here’s photo of it. Impressive, eh? Looks like something out of one of his movies. 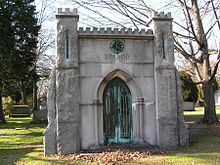 To find out more about  the history of vaudeville, consult No Applause, Just Throw Money: The Book That Made Vaudeville Famous, and for more on silent film see Chain of Fools: Silent Comedy and Its Legacies from Nickelodeons to Youtube.