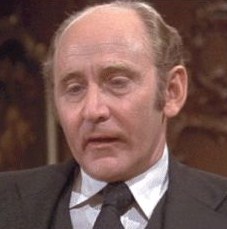 No doubt in my mind that Richard Stahl (1932-2006) has many fans, despite the fact that most of them probably don’t know his name. His bald dome and dry, midwestern drawl enlivened many a comic ensemble on screens both big and small. Stahl’s dour demeanor made him perfect for playing businessmen, doctors/ dentists/ lab technicians and various kinds of experts. He was good at playing dull guys with some narrow area of expertise, plodding along on the treadmill of life, and being vaguely put out by outsiders who disrupted his routine.  It makes sense to me to learn that he spent the 50s and 60s doing off-Broadway theatre and improv comedy in San Francisco.

Stahl might be best known today for having been a regular on the sit-com It’s a Living a.k.a. Making a Living (1980-89), but not by me (I’ve never watched that show). I knew him best from his work in many Garry Marshall projects — Marshall clearly loved him. He’s in no less than NINE episode of the original The Odd Couple — these are the appearances of his I treasure the most and remember the best. But  he’s also in three episodes of Laverne and Shirley, one of Happy Days, one of Blansky’s Beauties, and he’s in Marshall’s best movie (by far) The Flamingo Kid (1984). In fact both Stahl’s first screen credit (a 1966 episode of Hey Landlord) and his last (the 1999 film The Other Sister) were Marshall projects. Marshall appears to have been the Alpha and Omega of Stahl’s career.

But he was far from all of it! Norman Lear clearly liked him too, for he cast him on his shows All in the Family, Maude, Good Times, and Archie Bunker’s Place. Mel Brooks cast him in High Anxiety (1978). Clearly, Tony Randall enjoyed working with in on The Odd Couple, for he put him on his short-lived The Tony Randall Show. Stahl was also on The Bob Newhart Show and Newhart. Three episodes of Barney Miller. He was also a regular on the short-lived sit-com Turnabout (1979) with John Schuck and Sharon Gless. And he wasn’t only on sit coms. He was also very useful as comic relief on cop shows. Three episodes of Columbo, four episodes of Harry O., McMillan and Wife etc etc. And numerous films. These are just the tip of the iceberg.

Sadly, the onset of Parkinson’s Disease necessitated his early retirement at age 67. He passed away 7 years later.