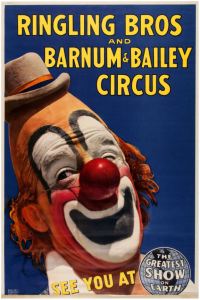 New Years Day was the birthday of one of the 20th century’s greatest circus clowns, Lou Jacobs (Johann Ludwig Jacob, 1903-1992). Jacobs’ influence on the form is incalculable; he was a giant in the circus business — one of the few, like Emmett Kelly, whose name was a household word.

Jacobs was second generation show biz; his parents were a song and dance team in German variety halls. He initially apprenticed with acrobats, but his true metier (and heart’s desire) lay in clowning. When Lou’s older brother Karl went to America to play the Keith vaudeville circuit as a contortionist, Lou followed. The year was 1923. He worked in vaudeville and fairs and carnivals as a comic acrobat for a while, and then, in 1925 was hired by the Ringling Brothers, Barnum and Bailey Circus — his home, essentially for the rest of his life. He was a whiteface clown for the first year or so, and then became an auguste. He is credited with creating the much imitated red rubber ball nose, as well as the midget clown car routine. He taught clowning routines to Jimmy Stewart for his role in the 1952 Cecil B. DeMille film The Greatest Show on Earth. In 1966 he was the first living American to be depicted on a U.S. postage stamp. He was so well-known and loved in the mid 20th century that Kellogg’s stuck his made-up mug on a box of Sugar Smacks! 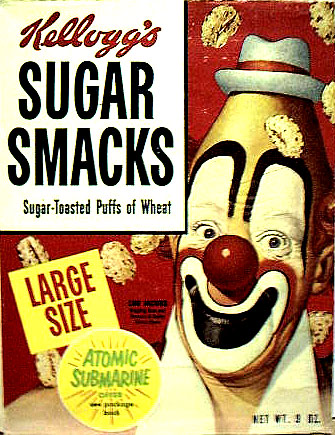 In 1969, he began teaching at Ringling Brothers Clown College, expanding his legacy hundreds of fold by filling future circuses with his pupils. In 1989, he was one of the first clowns to be inducted into the brand new Clown Hall of Fame.