Fred Hallen: Partner of Many Partners 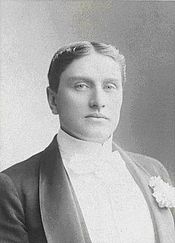 Frederic “Fred” Hallen (1859-1920) was a popular vaudeville entertainer, who always worked as one half of a team. He had rather a succession of them. In Forty Years Observation of Music and the Drama, Robert Grau tells us that Hallen, originally from Quebec, learned at the feet of minstrel show End Man Add. Weaver. Hallen’s first vaudeville partner starting in the 1870s, was his wife Enid Hart in the euphoniously named Hallen and Hart.

In 1889, probably due to his wife’s illness (she died the next year) he partnered with Joseph Hart, later to gain fame as the “Foxy Grandpa”. Humorously, this team was also known as Hallen and Hart. They toured with tab musicals called Later On and The Idea. They had much success with these shows, but the death of their agent Harry Hine is said to have brought up this second incarnation of the act. Hart went on to greater fame as a solo.

Next Hallen team up with (and married) Mollie Fuller, sister of the famous dancer Loie Fuller. Mollie was a veteran of the legit stage herself, having appeared in such plays as Adonis and Evangeline. As Hallen and Fuller, the couple performed short plays and sketches and became a major big time vaudeville act. In 1895 Hallen bought the rights to The Twentieth Century Girl for Fuller to star in.

Hallen died of stomach cancer in 1920. Fuller was discovered to be blind and destitute a few years later and lived out the rest of her life as a charity case until 1933.