Brooklyn born character actor George O’Hanlon (1912-1989) was the son of George Samuel O’Hanlon and Lulu Beeson, who performed in vaudeville as Sam Rice and Lulu Beasley. Both father and son began working in films in bit parts in the early 1930s. The elder O’Hanlon remained a walk-on until his death in 1946, despite having once been known as “The King of Burlesque”.

The younger O’Hanlon’s big break came when he was cast in Warner Brothers’ series of “Joe McDoakes” shorts, which ran from 1942 through 1956. The titles of the McDoakes shorts all begin with “So You…” (i.e., So You Think You Need Glasses or So You Think You’re Allergic), and he co-wrote most of them as well. The series had begun as a straight “how to” concept, shot MOS a la MGM’s “Pete Smith” specialties, but rapidly came to contain dialogue and other narrative elements, all played for comedy.

The popularity of the shorts gave O’Hanlon a leg up into features, and he began to be cast in B movies and main features like June Bride (1948) and Cattle Town (1952), usually as the funny friend. From the 1950s through the 1970s, he became a familiar in guest shows on popular shows like The Dennis Day Show, The Life of Riley, I Love Lucy, The Jackie Gleason Show, Love American Style, Adam-12, and The Partridge Family. He also wrote episodes for such shows as 77 Sunset Strip, Petticoat Junction, and Gilligan’s Island. 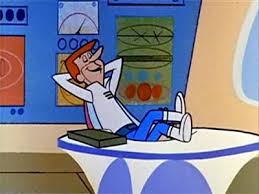 But his best loved character from 1962 until his death was the role of George Jetson, which he voice on the original animated series and then in several 1980s revivals (in fact he was working on a Jetsons movie at the time of his death). O’Hanlon had been shortlisted for the voice of Fred Flintstone but lost the part to Alan Reed. When The Jetsons was devised, the role was all his. Such a wise decision! You can hear the Brooklyn in O’Hanlon’s voice, which helps us relate to him, but he definitely sounds more finished and middle class than Reed’s, rougher, gruffer voice, which is better for Flintstone.

And thus we have gone all the way from vaudeville to the space age. And it continues, for O’Hanlon’s son George O’Hanlon, Jr. is also an actor who’s been working mostly in television guest shots since the mid 1970s.