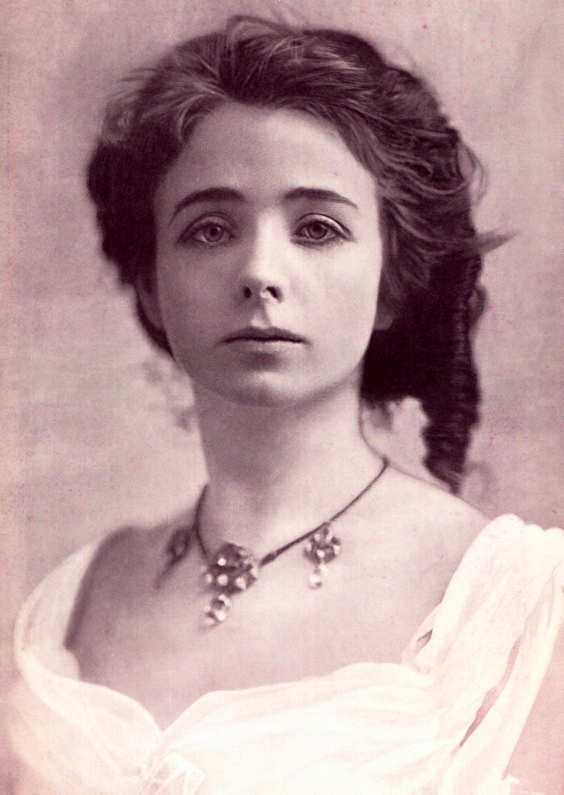 Maude Adams (Maude Ewing Adams Kiskaadden 1872-1953) is one of those wonderfully transitional figures in the American theatre, with one foot in the 19th century, one in the 20th. There are all these interesting facets to her make-up: of Mormon stock and culture, she was also a pioneering lesbian, the most popular actress of her day, a famous beauty, the original Peter Pan, and the inspiration for the love interest in the 1980 film Somewhere in Time. For a number of years, I confused her with Maud Allen, the original Salome, also a theatrical pathbreaker. Nor is she to be confused with Maud Adams, the Swedish Bond Girl! 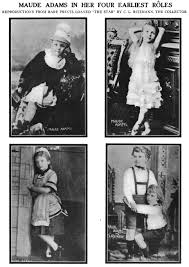 The opening chapter of Maude Adams’ life is that old style western actress narrative, not unlike Lotta Crabtree’s. She was a second generation actress, the daughter of Asaneth Ann “Annie” Adams Kiskadden, whom Maude would later appear with in some of her Broadway plays. Maude was born and raised in Salt Lake City but toured with her mother from infancy. She made her stage debut before she was even a year old. Mormon culture was certainly an enormous influence on her life, although the extent to which she herself was a Mormon is a little muddy. Her great grandfather had converted to Mormonism when the community was still in Missouri and had come west with Brigham Young. Her mother’s family, the Adamses, were of Puritan stock, going back to the earliest Pilgrim times (I am distantly related to her on this score). At any rate, she was a child actress, touring the great expanses of the west. By the time she was five years old she was starring in plays in San Francisco.

She began appearing on Broadway in 1888 in David Belasco and Henry De Mille’s Lord Chumley alongside E.H. Sothern. She scored a hit in Charles Hoyt’s 1889 production of A Midnight Bell. Charles Frohman then signed her to a contract and managed her career going forward, making her a star. In 1890 he commissioned Belasco and De Mille to write another hit for her, Men and Women. In 1892 she began appearing in a series of plays with John Drew, Jr. the uncle of the Barrymores. 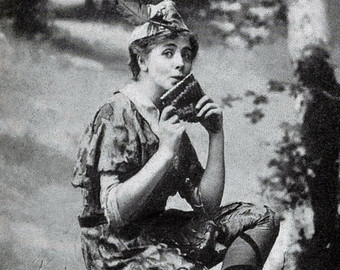 In 1897 she began her long association with J.M. Barrie, starring in The Little Minister, followed by his plays Quality Street (1901), Peter Pan (1904-1906, 1912, 1915), What Every Woman Knows (1908), The Legend of Leonora (1914), and A Kiss for Cinderella (1916, her last Broadway role). Peter Pan was historic, though, her most popular role, but also a kind of cultural bellwether, essentially building on the old British panto tradition of Principal Boy — casting a female actor as a male juvenile. It was a highly physical role; every subsequent Peter Pan has had to step into Adams’ very large footsteps. Adams had previously played a male role as the title character in Edmond Rostand’s L’Aiglon (1900), about Napoleon II. She always cited this, and not Peter Pan, as her favorite part.

Widely publicized as a chaste angel in the Victorian/ Edwardian tradition, in her private life (and she was highly private) Adams had two long term lesbian relationships (essentially Boston Marriages) from the early 1890s through the end of her life.

Two events conspired to bring about her early retirement. In 1915 her long-term patron Charles Frohman was killed on the Lusitania. And in 1918 she was stricken in the Great Influenza Epidemic. She survived it, but millions — no exaggeration, millions — didn’t. In the 1920s she spent a lot of time on retreats in Catholic convents, no doubt contemplating mortality. Do you blame her? 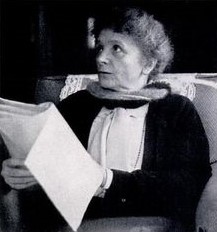 In the 1930s, she resumed her professional career. She appeared in regional Shakespeare in 1931 and 1934; went on NBC radio in 1934 to voice The Little Minister and Peter Pan; recorded recitations of Christmas stories for a record album; filmed a screen test for David O. Selnick in 1938 (her only experiment with film); and ran the drama department at Stephens College in Missouri from 1937 through 1943. She died at her home in the Catskills a decade later.

The “no movies” thing is interesting to me. There were plenty of creatures of the stage (Helen Hayes, Lunt and Fontanne, Ethel Barrymore) who made few movies, but it’s quite rare to have made none. It’s not strictly due to the fact that she was slightly older. Sarah Bernhardt made lots of movies. May Irwin was filmed for the The Kiss in 1895! But there is such a thing as being “camera shy”. Anxiety about a permanent record is undoubtedly one of the things that creates that shyness. But a record of her work is the very thing we wish we had right now! But there are photographs — scores or hundreds of them, and it was very hard for me to include only a couple of them here. If I could, I would include them all, for she was gorgeous, Evelyn Nesbit-level gorgeous. Someone should have cast her as Helen; I’d fight a war for that much beauty!

To learn more about show business history consult No Applause, Just Throw Money: The Book That Made Vaudeville Famous, available at Amazon, Barnes and Noble, and wherever nutty books are sold.