The Short Life But Long Fame of Norman “Chubby” Chaney 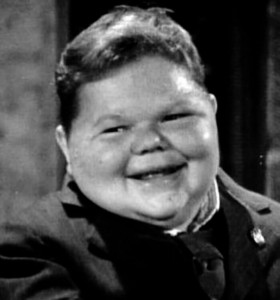 How surprising to learn that Norman “Chubby” Chaney’s (1914-1936) time as a Little Rascal was so short, and also to learn that his time on earth was, as well.  He’s in just 19 Our Gang shorts from 1929 through 1931. Those 19 are clearly among the ones that got a lot of television airplay, however, and Chubby was one of the more memorable kids, not just on account of the way he looked, but because of his winning personality. Notable shorts he appeared in include Love Business (the one where he asked Miss Crabtree to call him “Chubsy Ubsy”), Teacher’s Pet and Boxing Gloves.

Chaney had been hired as a replacement to the equally plus-sized Joe Cobb, one of the original kids who was aging out, and apparently unsuited to talkies. “Chubby” is an understated nickname, to be sure. The boy was grossly corpulent, virtually spherical in shape. At the time he was a Little Rascal he weighed 113 lbs., despite being less than four feet tall. And yet, a little math tells us that the boy was 15 years old when he started with Our Gang, and 17 when he he left. He clearly had a health problem of some sort. He was later diagnosed with a glandular problem. The tallest he ever got was 4′ 7′, and yet he grew to weigh over 300 lbs. Doctors operated on him; he lost nearly 200 lbs. And not long afterward he had a heart attack and died.

His time with Our Gang comprised the entirety of his show biz career. After leaving the movies, he returned to his native Maryland. Sadly, his family could not afford a marker for his grave when he passed away. Finally, in 2012, fans chipped in and erected this stone: