Dolly Read a.k.a. Mrs. Dick Martin: A Love Story for the Ages (or at least the Age of Aquarius) 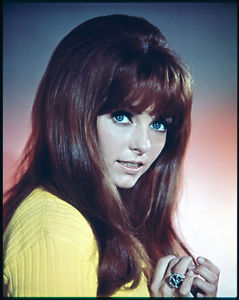 We promise we’re not obsessed with Beyond the Valley of the Dolls, nor even going through a phase, it’s just that its star Dolly Read’s (1944) birthday is literally the day after Cynthia Myers’.

Originally from Bristol, England, Read’s earliest film and tv credits are in her home country. She’s an extra in the Hammer horror film The Kiss of the Vampire (1963) and she had bit parts on the tv shows Dixon of Dock Green (1963), Comedy Playhouse (1964), and Thursday Theatre (1965). In May 1966 she was Playboy Magazine’s Playmate of the Month, precipitating her move to the U.S. Her American film career began with the low budget exploitation film That Tender Touch (1969), and this led to her getting cast as the lead in Russ Meyer’s camp classic Beyond the Valley of the Dolls the next year. Read’s doe-like innocent quality was perfect for the character of Kelly, a naif, and her British accent made her seem hip. Amusingly, in this interview with popcultureaddict.com, she reveals that she had no idea that the film she was in was a goof until several years after it had been made.

In 1971 she married comedian Dick Martin, then the co-host of the hottest show on television Rowan and Martin’s Laugh-In. The pair remained married until his death in 2008, with a single break from 1974 to 1978 (they divorced in ’74 then remarried in ’78, though they were together through most of the divorced period as well). Her professional name changed after the marriage, sometimes to Dolly Martin, Dolly Read Martin and sometimes even Mrs Dick Martin. Throughout the ’70s, often with her husband beside her, she was a panelist on game shows like Match Game and Tattletales, and she did guest shots as an actress on Charlie’s Angels, Vega$ and Fantasy Island. In the ’80s she essentially retired to be Mrs. Dick Martin, and according to this interview, appears to have no regrets.