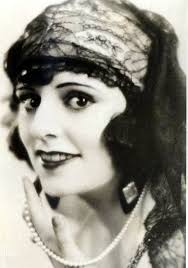 August 31 is the birthday of Lucille Carlisle (Ida Lucile White, 1895-1958). Lucille had a short but significant silent movie career as Larry Semon’s leading lady during some of his peak years of popularity (1918-1923).

Born in Galesburg, Illinois, Carlisle won a beauty contest sponsored by Photoplay Magazine in 1916. This led to a part in the 1917 Broadway show His Little Widows, produced by Broncho Billy Anderson, and starring Carter de Haven. Early in her career she was billed as Lucille Zintheo, apparently her married name, although few details have been learned about her husband. In 1918, she was cast in the Larry Semon comedy Boodles and Bandits as a Lady Sheriff. By the following year the beautiful, vivacious and funny Carlisle had established herself as Semon’s leading lady, co-starring in most of his comedies through 1923. As it happens, almost all of these shorts survive and are available to watch on Youtube; her filmography is here.

Apparently, Semon and Carlisle had a tempestuous romantic relationship offscreen as well as on. She only appeared in one film during 1921. One source says they became involved when Semon was still married to another woman who’d remained in New York while Semon shifted his operations to Vitagraph’s Hollywood facilities. Semon and Carlisle may have been briefly married 1922-1923. But they soon definitively broke apart. Her last film for Semon (and least screen credit, period) was called, significantly No Wedding Bells (1923). Several sources say she vied for the role of Esmerelda in The Hunchback of Nore Dame (1923), which would have been a great leap forward in her career, but she lost out to Patsy Ruth Miller. As for Semon, he would soon move on to Dorothy Dwan, both onscreen and off.

In 1930, Carlisle married a luxury car dealer. She retired from show business apart from some radio acting in the 1930s and 40s.

For more on silent comedy film history, please get my book Chain Of Fools: Silent Comedy and Its Legacies from Nickelodeons to Youtube.