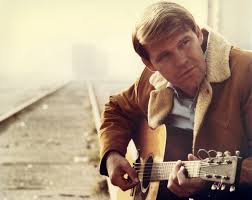 R.I.P. Glen Campbell, who passed away today at the age of 81, and let me tell you something, that ages ME, because well do I remember our family gathered to watch The Glen Campbell Goodtime Hour when Campbell was a fairly young man in his mid to late 30s. 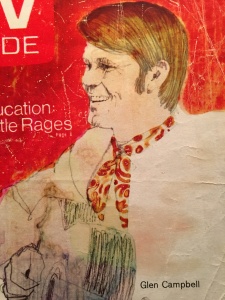 I don’t think Campbell was conservative particularly, he just liked to pick and grin and give everybody a good time. In fact, that was sort of his comic persona, such as it was, on his own tv show, and when he appeared on other people’s variety shows, and in his rare film appearances as in True Grit (1969). He liked to play that he was dumb, cheerful, a little goofy. If he’d been a better actor he’d have been PERFECT for the character of Joe Buck in Midnight Cowboy (1969). I’d be shocked if the character wasn’t somehow BASED on his persona. (Ye Gods, Nilson’s version of “Everybody’s Talkin'”, the movie’s theme song, backed by the Wrecking Crew, of which Campbell had been a member, SOUNDS like Campbell!)

Anyway, the point is that he was an Arkansas hillbilly, All-American, the same stock of people as my dad’s family. Not only do we have many a Campbell in our family tree; but Glen Campbell’s middle name — like mine — was Travis.  (And my grandfather’s name was Glenn!) 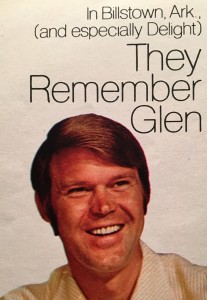 1968 was a moment of sea change, when the country turned away from Kennedy-Johnson era activism and towards Richard Nixon. The right-wing hell we have been living in ever since can be traced at least as far back as that. I don’t blame Campbell for it; like I said he wasn’t a political guy (he was a registered Democrat who supported both parties and swung more Republican in later years).

But damn I love his music. I particularly love “Witchita Lineman” (1968). My friend Frank Cwiklik used it for his stage adaptation of Quicksand which I acted in back somewhere around the turn of the century, and MAN I grew to loving hearing that song every night, its surprising melodic turns, and that voice of Campbell’s ringing out clear as a bell. My oldest brother, a bit of an obsessive compulsive, had a major thing for “Rhinestone Cowboy” (1975) — I must have heard that one a thousand times. And I must have heard “Southern Nights” (1977) almost that many times strictly from radio plays.  “Gentle On My Mind” and “By the Time I Get to Phoenix (both 1967), and “Galveston” (1968) are all great too, if less flashy.

But above all I associate him with youth: apple-cheeked, red-blooded, tow-headed health and vigor. For God’s sake, he’d even been a substitute Beach Boy! I think that’s why so many of us were so shocked a few years back when stories broke about his Alzheimer’s. Photographs of the grizzled and confused old man, no longer cheerful, in fact, now kind of snappish and nasty. The Glen Campbell everybody first knew and loved died quite a while back, I think. It’ll always be bittersweet to look at those older clips and listen to the older records. But it always is anyway.