Aw, man, this late in the day this guy can still be properly fooled.

I had never probed too deeply into the background of silent screen actress Theda Bara (Theodosia Burr Goodman, 1885-1955), whose birthday it is today. Or, if I did, it was a long while back and I’d forgotten about it. I’ve long known the basics, of course. Theda Bara was the quintessential screen vamp, one of Hollywood’s top silent stars, who played all the great wicked sirens of literature and history. And she was extremely influential. Many stage and screen actresses emulated her. In my book and a blogpost I’d used a picture of the young Mae West in full Theda Bara drag early in her career. And there are great cultural bellwethers like this: 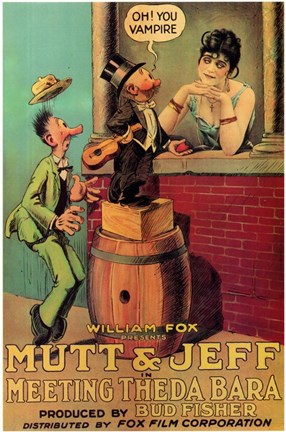 What I didn’t know — or perhaps forgot — was the extent of the hoodwink at the center of her career. I’d assumed that, much like, say, Nazimova or Pola Negri, she was an exotic foreign female from Eastern Europe or someplace. But, no. While her father was indeed a Polish Jew, Theda herself was a straight-up American girl from Cincinnati. Naturally, the movie flacks of her day put out quite different, more colorful stories about her background, that she was an Egyptian princess or something, and maybe I subconsciously swallowed that over the years. But, no, she’s much more like one of my favorite vaudevillians, Olga Petrova, a big (huge) delightful, imaginative invention, a projection, a fantasy. I love it so much when the pretend spills out beyond the stage and screen to create another dimension in the real world. Technology makes it harder to accomplish, but I think some occasionally manage.

Bara even had a couple of regular old, quotidian years at the University of Cincinnati! She did some local theatre, then moved to New York, where she appeared in the play The Devil in 1908 using the pseudonym Theodosia De Cappet. She then barnstormed with touring stock companies, returning to the New York area in 1914. That year, she got a part as a gang moll in Frank Powell’s film The Stain, made for Pathe Freres. It was Powell who discovered her and made her a star, casting her as “The Vampire” in his next picture A Fool There Was (1915), made for Fox, which was then based in Fort Lee, NJ. She became a contract player for Fox and their top star. Her screen name was adapted from her childhood nickname + a shortening of her maternal grandfather’s surname. Studio p.r. men, however, have out that it was “Arab Death”, with the letters switched around.

Periodically, she did try to break out of her typecasting, as when she played Juliet in Romeo and Juliet (1916), and the title character in an adaptation of Boucicault’s Kathleen Mavourneen (1919), one of her last films for Fox. There was public outcry among Irish-Americans when she essayed the latter — it was considered a profanation to have a wicked woman play a part they considered sacred. Back then, it was common for the wider community to confuse screen actors with the parts they played.

Tired of playing the vamp, Bara broke her contract with Fox, and returned to the stage, starring in the 1920 Broadway play The Blue Flame (in which, ironically she played another femme fatale), which then went on tour. She was trashed by critics, though tickets sold like crazy. Despite the financial success, she cut the tour short unwilling to endure the embarrassment any longer. I’ve read some of the reviews; they were truly mean.

In 1921, she married film director Charles Brabin. She next toured vaudeville for a while, presenting herself as a celebrity as opposed to an actress (i.e., she spoke with audiences about her experiences; she didn’t risk acting in a play). In the mid 20’s she attempted a very brief cinematic comeback, starring in The Unchastened Woman for Chadwick Pictures in 1925, and then the two comedy shorts for Hal Roach. It’s not the craziest development in the world. For example, Mae Busch had also been one of the screen’s greatest vamps, and then in middle age she wound up being one of Roach’s most dependable comedy actresses.

After this she retired for the most part, although she did do an art theatre revival of Bella Donna in 1934 (presumably in the Nazimova part), and a few isolated but high profile radio appearances. She died of stomach cancer at age 70.

For more on vaudeville including performers like Theda Bara and Mae West see No Applause, Just Throw Money: The Book That Made Vaudeville Famous, available wherever fine books are sold, and for more on silent film consult Chain of Fools: Silent Comedy and Its Legacies from Nickelodeons to Youtube,  released by Bear Manor Media, also available from amazon.com etc etc etc.