On the Pivotal Thomas Mitchell: From Classics to “Columbo”

The great Thomas Mitchell (1892-1962) came into the world on this day. Mitchell remains well known today as a character actor with parts in an unnaturally long list of Hollywood classic movies — the full weight of them is almost too much to talk about. The best known are Gone With the Wind (1939), It’s a Wonderful Life (1946), Stagecoach (1939) and Mr. Smith Goes to Washington (1939). I had already seen these movies when I was a kid, and that’s a good measure of their evergreen reach. There are dozens more besides, which we’ll get to. Yet, we are such a movie-centric culture, seeing Mitchell solely in this light gives a false, incomplete appreciation of his entire career. Movies were just the tip of the iceberg. Prior to Hollywood, he had been an actor, playwright and director for the stage for over twenty years, and continued to appear on Broadway stages and regionally over the rest of his career. During the Hollywood years, he was not just an actor, but an occasional screenwriter. Then, like most of actors of his time, he was constantly on radio throughout the 40s.  And then, over the last decade of his career, he did a huge amount of television.

So Mitchell was prolific. But he was also emblematic of a cultural shift. He was a quintessential man of the theatre and her daughter arts, but unlike many who had gone before, and who may spring to mind, he was not the slightest bit “Anglo”. Back in the day, your typical man or woman of the stage, even in America, was ever self-consciously that. The three Barrymore siblings, though they were one-quarter Irish — think of their manner, and multiply it across the generations. Warren William, Frank Morgan and even Mitchell’s own mentor Charles Coburn (whom we’ll return to) all affected English style. It was dunned into actors at the time.  But Mitchell was the son of Irish immigrants, and there was surely no point in ever pretending otherwise. His face was like the caricaturist’s conception of a leprechaun’s, and he could summon the brogue of his parents for a role at a moment’s notice. And yet interestingly (whether its because or in spite of that, I don’t know) we also think of him as just “American”. Mitchell’s father and older brother were both newspapermen, and Mitchell dabbled in journalism briefly in his youth before choosing the theatre. Think of all the newspaper editors and reporters he plays so authentically. The gruff voice, the unshaven face, the twinkle in his eye, the unlit cigar in his puss. The quality carries over so well into other American archetypes — the country doctor, the provincial politician, the crusty uncle. He represents a sea shift that was probably more noticeable to our forbears. With actors like Mitchell, American culture was coming into its own. Nothing English about that guy.

Mitchell claimed in a 1939 article that he cut his teeth by touring vaudeville with a once act play he’d written about the poet Thomas Chatterton. As we said, for a time he toured with Charles Coburn’s Shakespearean stock company. By 1916, he is already on Broadway, appearing in the play Under Sentence with Edward G. Robinson and Frank Morgan. Over the next twenty years, he was constantly on the Broadway stage, appearing in or directing some two dozen plays. And his own plays were produced there, including Glory Hallelujah (1926), Little Accident (1928-1929, and later adapted into movies more than once), and Cloudy with Showers (1931). After Stick in the Mud (1936) he made the move to Hollywood, but he returned to Broadway another half dozen times, notably in the original production of J.B. Priestley’s An Inspector Calls (1948-49), as a replacement in the original production of The Death of a Salesman (1949-1950) as Willy Loman (how I’d love to have seen that!), and the musical Hazel Flagg (1953), for which won a Tony. His last Broadway appearance was in Cut of the the Ax (1960), which closed after only two performances. 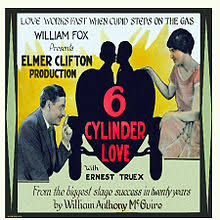 He only appeared in one silent film, Six Cylinder Love (1923). Interestingly one of his fellow players in that film was Donald Meek, with whom he later appeared in Stagecoach. This occasion seems like an experiment, an anomaly. He was very successful on Broadway and probably saw no reason to switch horses to this upstart medium where the audience couldn’t hear you speak, and where you heard no applause.

But by 1936, many things had changed. Broadway was badly hurt by the Great Depression. And talkies had not only proven their viability they also paid former stage actors big money. His first speaking part was in Craig’s Wife (1936) an adaptation of the George Kelly play, the easiest transition conceivable for him. And then: it was like he had a charmed career, especially at the outset. Highlights included Frank Capra’s Lost Horizon (1937), the incredible John Ford disaster movie The Hurricane (1937), and that same director’s beloved Stagecoach (1939), for which Mitchell won a Best Supporting Actor Oscar. 1939 was a magical year for him, for in addition to Stagecoach, he also had key roles in Gone with the Wind, Mr. Smith Goes to Washington, The Hunchback of Notre Dame, and Only Angels Have Wings. 1940 wasn’t much worse: among his several pictures that year were Swiss Family Robinson, Thornton Wilder’s Our Town, and Ford’s adaptation of Eugene O’Neill’s The Long Voyage Home. Other notable pictures: The Black Swan (1942), the notorious Howard Hughes western The Outlaw (1943), The Sullivans (1944), Buffalo Bill (1944), Wilson (1944), It’s a Wonderful Life (1946), and High Noon (1952). His last film role was in Capra’s Pocketful of Miracles (1961). Further, his Broadway play Little Accident was made into a movie three separate times, and he co-wrote the screenplays for All of Me (1934), and Casanova Brown (1944).

And just as our tendency to be movie-centric causes us to neglect his early theatre work, it may also cause us to miss his late work in the broadcast media of radio and television. This is interesting to me — folks older than myself no doubt will remember him from this work. Conceivably, one could remember him primarily from this work. It is so voluminous one can scarcely wrap ones arms around it. In the radio days, he made repeated appearances on shows like Suspense, The Cavalcade of America, Lux Radio Theatre, and Anthology. On TV, some of the shows he appeared on (often numerous times) included Lux Video Theatre, The O. Henry Playhouse, The Ford Television Theatre, and at least a dozen others. he also was the star of two different tv series of his own: Mayor of the Town (1954-55), and Glencannon (1959).

And amazingly — and this is quite true — Mitchell’s last role was the part of police detective Lt. Columbo, later made famous on the tv series starring Peter Falk. Created by writer William Link, the character had made on The Chevy Mystery Show, with Bert Freed, in the role in 1960. Its next incarnation was a stage play at the Curran Theatre in San Francisco on January 1962, with Mitchell as Columbo, with Joseph Cotten and Agnes Moorehead as his co-stars. Mitchell died of cancer during the play’s tour. But I love this so much — it makes him this wonderful link between the past and future. This Irishman, who started out doing Shakespeare with Charles Coburn takes us all the way to the modern age, playing this Italian police detective, and would end up (metaphorically) handing the baton to Peter Falk, a Jewish guy who would play the part on television into the 21st century.

For more on vaudeville history, including touring thespians like Thomas Mitchell consult No Applause, Just Throw Money: The Book That Made Vaudeville Famous, available at Amazon, Barnes and Noble, and wherever fine books are sold.