Gladys Glad: Glad All Over

1926 was to be the pivotal year in this Glad Girl’s life, for in that year the fetching 19 year old won a beauty contest sponsored by the Daily News and was cast in the chorus of her first Broadway show, the Ziegfeld revue No Foolin’, which also featured Moran and Mack, Charles King, Ray Dooley, Paulette Goddard, Peggy Fears, et al. Ziegfeld must have loved Gladys Glad, and she, him. She was to appear in a half dozen of his Broadway productions — and no one else’s. She was in Rio Rita with Wheeler and Woolsey (1927-28), Rosalie (1928) with Marilyn Miller and Frank Morgan, Whoopee! (1928-1929) with Eddie Cantor, and Ziegfeld’s Midnight Frolic (1929). There was one more Ziegfeld show to come, but first, an interruption:

In 1929, she married columnist Mark Hellinger, who had been a judge in that beauty contest we mentioned earlier, which was the occasion of the their first meeting. It was said she was the love of his life, and she could match him drink for drink, but still the marriage would prove to be rocky. He was a chronic workaholic, and frequently unfaithful. 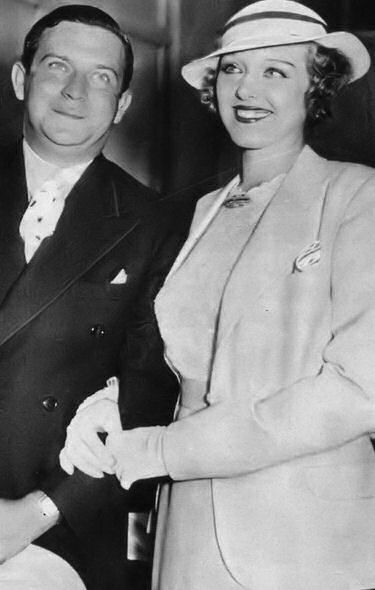 But in the first leg of their lives together they were closely-knit, both romantically and professionally. In 1930 they toured the Loew’s vaudeville circuit together with an act. In 1931, they were both involved with the Ziegfeld Follies. He wrote comedy sketches; she stood out in the show as “The Follies Girl of 1931″, ‘The Queen” and “The Beautiful White Goddess.”

During the run of this edition of Follies Glad and Hellinger were involved in a horrible accident. They, and a bunch of friends were relaxing on Harry Richman’s yacht off Greenport, Long Island, when the engine (for no reason that was ever ascertained) blew up. The Hellingers emerged shaken but unscathed, but Gladys’s good friend and fellow chorus girl Helen Walsh was badly burned, and died a few days later of her injuries. That story is reported here.

In 1932, Glad and Hellinger divorced — only to get re-married again a few months later. They remained married for the rest of Hellinger’s short life. The Follies of 1931 was Glad’s last show. But she kept busy. In the 1930s she wrote a beauty advice column for the Daily News. These columns were later excerpted and released as a series of pamphlets, like this one, “The New Figure: Reducing and Gaining”:

In 1933 her career came full circle when she was one of the judges of the Miss America pageant:

The Hellingers’ lives began to change in the late 30s. In late 1936 Hellinger produced the Broadway show Double Dummy. The following year, the pair moved to Hollywood. Hellinger already done some work there; he’d co-written the screenplay for Frank Capra’s Broadway Bill (1934). But in 1937 he began working as a full time writer/producer for Warner Brothers. With this career move, he began the hard-driving, hard-working life that killed him of heart failure a decade later. Glad’s life was primarily devoted at this stage to caring for the two children the couple had adopted in the early ’40s.

In June 1947 she sat for this portrait by John Decker, best remembered today as a drinking buddy of W.C. Fields and John Barrymore. It was to be his last painting.He died shortly thereafter. Six months later, Hellinger was also dead.

In December 1948, almost exactly a year into widowhood, Glad married Toronto film executive Arthur Gottlieb, thenceforth becoming known as as “Gladys Glad Gottlieb”. In 1952 she wrote the introduction to Jim Bishop’s book The Mark Hellinger Story: A Biography of Broadway and Hollywood. Her last decades seems to have been involved with running charities started by Hellinger. And when she died in 1983, though Gottlieb had predeceased her 20 years earlier, she was buried alongside Hellinger at his plot in Sleepy Hollow, New York.

For more on the variety arts, including revues like the Ziegfeld Follies, consult No Applause, Just Throw Money: The Book That Made Vaudeville Famous, available at Amazon, Barnes and Noble, and wherever fine books are sold.