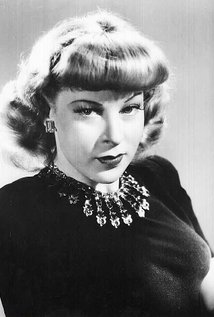 Singer, actress and comedienne Gertrude Niesen (1911-1975) was born on this day.

Niesen started out as a child performer in vaudeville. She was trained for opera, but became a pop singer in big bands, in films, on radio and records, and was cast in the occasional Broadway show. Half Swedish, Half Russian, her exotic, vaguely “Eastern” beauty added to her appeal.

I became aware of her from her 1932 Vitaphone short Yacht Party, in which she sang with Roger Wolfe Kahn and his Orchestra, and Artie Shaw.

In 1933, she became the first person to record the Kern-Harbach standard “Smoke Gets In Your Eyes” from the musical Roberta. Often referred to as a “torch singer”, she was prized for her comic ability as much as her singing. She was a frequent radio guest throughout the 1930s and 40s on the shows of such stars as Rudy Vallee, Edgar Bergen and others.

With vaudeville all but wound down, in the early 30s one finds her performing in the big presentation houses that largely replaced it, like Loew’s State in NYC, the Orpheum in Los Angeles, or the various RKO houses.  She was on the bill at Radio City Music Hall’s Inaugural Spectacular in 1932. Broadway shows included the Lew Brown revue Calling All Stars (1934-1935), the Ziegfeld Follies of 1936, and the biggest hit of her career, Harry Delmar’s Follow the Girls (1944-1946), in which she played a burlesque queen named Bubbles Lamarr. Co-starring Jackie Gleason, Follow the Girls played over 800 performances on Broadway, then went on tour. Niesen’s show stopping number was “I Wanna Get Married”.

Niesen appeared in a dozen films between 1932 and 1948, usually playing some version of herself singing in a night club. The last two are probably best known today: This is the Army (1943) with George Murphy, and The Babe Ruth Story (1948) with William Bendix. She also co-wrote the song “I Want to Make with the Happy Times, which was used in A Night at Earl Carroll’s (1940). 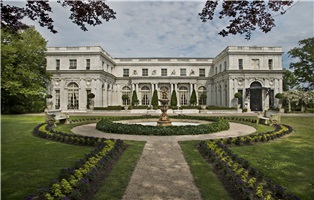 In the 1941 she became the owner of the Newport mansion Rosecliff, estimated to have been worth $2.5 million at the time but purchased by Niesen’s mother as a birthday present for $17,000 at auction. The Depression and wartime combined to make upkeep very problematic, which is how the family managed to acquire it for such a low price in the first place, and indirectly why they sold it off soon thereafter. In March 1942, with no caretaker having been hired for the winter, all the pipes froze and burst, flooding the house with lakes and waterfalls which in turn froze into great, thick sheets of ice. The Niesens resold the house not long after that. Both the purchase and the damage received national publicity.

In 1950, she starred in the west coast production of Gentlemen Prefer Blondes, taking the Carol Channing role. She also did lots of tv variety in the early days of television, singing on the programs of Ed Wynn, Milton Berle, Jack Carter, Paul Whiteman, and others. Her last tv credit is in 1951. The last recordings I can find from her are from 1953.

In 1943, Niesen married Chicago nightclub owner Al Greenfield, owner of The Black Orchid and other establishments. The couple were divorced but remarried in 1954, remaining married until Niesen’s death in 1975. Her death notices all mention a “long illness”. Given that her last professional activity seems to have happened around 1953, and that Greenfield sold The Black Orchid in 1956, reportedly to be with her, one speculates the illness, whatever it was, was very long.

For more on vaudeville, including performers like Gertrude Niesen, consult No Applause, Just Throw Money: The Book That Made Vaudeville Famous, available at Amazon, Barnes and Noble, and wherever fine books are sold.