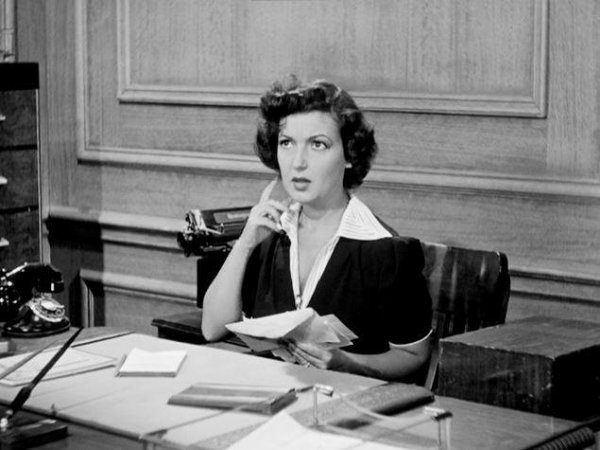 Comic actress Beatrice Blinn (1901-1979) was born on this day. While I’d seen her in many, many other films previously, I didn’t take note of her until I saw her in the 1934 Vitaphone short Art Trouble, with Harry Gribbon, Shemp Howard, Marjorie Main, Mary Wickes, and — most notably — a very young, early career Jimmy Stewart. Piecing her life and career together has been an interesting puzzle. I’m not all the way there yet but I’m close.

Born in Forest County, Wisconsin, she was the niece of stage and screen actor/director Holbrook Blinn, who directed plays at the Princess Theatre, and appeared in the films McTeague (1916), Janice Meredith (1924), and The Telephone Girl (1927). The elder Blinn undoubtedly could have, would have, and did provide useful introductions for her in the theatre. Yet most of her early publicity describes her as a “Seattle artist” who joined the chorus of the show Gay Paree in 1925 so that she could paint and sketch chorus girls. That may sound like a stretch to you, and it might have to me — but for the fact that I am very close to someone who is fairly obsessed with drawing chorus girls — my wife! At any rate, it is quite possible that both paths are accurate: her uncle was useful and his beautiful niece joined the chorus on a lark. It’s not without precedent. One of the greatest actors of the 20th century, John Barrymore was a visual artist until one day he decided to give the family business a whirl, and it turned out to be the thing for him.

In early 1926 Blinn appeared in the melodrama Nightstick at Werbla’s Theatre, Brooklyn. This show moved to Broadway a year later, but Blinn wasn’t in it. She had already made the move to the Great White Way several months earlier to appear in the 1926 play The Adorable Liar. After a couple more Broadway roles, she married playwright/actor/director Crane Wilbur in 1928, another connection likely made through her famous uncle. 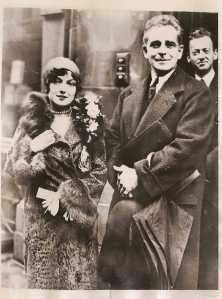 What is especially interesting to me about Beatrice Blinn’s ensuing career is that it is a hodgepodge of roles in prestige Broadway plays, classic Hollywood films (usually in small parts), and low-down slapstick comedy shorts — pretty much all at the same time!

She first went with Wilbur to Hollywood in 1929, and appeared in three talkie comedy shorts. Grass Skirts (1929) was an Educational short, directed by Alf Goulding, and starring Lloyd Hamilton and Ruth Hiatt. She co-starred with Johnny Arthur in the 1929 Vitaphone Stimulation. The Cheerleader (1930) was a drama starring one Tom Douglas.

In 1933 Blinn and Crane divorced. She returned to Broadway, next appearing in the original productions of three George S. Kaufman shows: The Dark Tower (1933-1934), Merrily We Roll Along (1934-1935), and Stage Door (1936-1937). Note that the aformentioned 1934 Vitaphone short Art Trouble was shot at their Astoria, Queens studio while she was living in New York.

After this she went back to Hollywood for that unusual career, juggling bit parts in classic features and better parts in low down comedy shorts and B movies. The features included Mr. Deeds Goes to Town (1936), Lost Horizon (1937), Holiday (1938), You Can’t Take it With You (1939), Golden Boy (1939), and Mae West’s The Heat’s On (1943). At the same time you can see her in Columbia comedy shorts with Three Stooges, Buster Keaton, Andy Clyde, and Charley Chase. These comedy “classics” include the Stooges’ Whoops, I’m an Indian (1936), and Violence is the Word for Curly (1938). In Keaton’s Nothing But Pleasure (1940) she gets to play the drunk woman in his umpteenth re-creation of his famous Spite Marriage bit. Her last film was Pick a Peck of Plumbers (1944) with El Brendel and Shemp Howard.

After this, she pretty effectively vanishes, with no mention I have found until she dies in San Diego in 1979. Why she retired at that stage, a relatively young age, can only be conjecture, as would be what it was she moved on to afterwards. Did she return to her art? Did she luck into another line of work that paid more and was more satisfying than the bit roles which seemed to be her permanent lot in the movies business? Did she go back to the theatre in some regional city? We’d be delighted to know the answer and we’ll be sure to share the answer here once we uncover it. One conclusion I feel comfortable drawing from afar: she must had a lousy agent. Beatrice Blinn had many advantages and for a time a promising resume. But these assets were clearly not maximized.