July 6 was the birthday of Texas born burlesque dancer, stripper, nude model and actress Candy Barr (Juanita Dale Slusher, 1935-2005).  Barr rose to a fame rarely afforded to others in her profession, for a long list of reasons.

One: there’s her iconic gimmick, the cowgirl outfit with the toy guns. That’s a classic, one I’d put on a very short list of the strongest burlesque gimmicks. The U.S.O. scene in Apocalypse Now (1979) features a go-go dancer who is totally channeling Candy:

Thirdly, she was famous for her associations. For several years in the 1950s, she dated gangster Mickey Cohen. She was also a close friend and confidante of Dallas nightclub owner Jacky Ruby, particularly during the months just prior to the Kennedy assassination and Ruby’s murder of Oswald. She appears to have been the lover, at one point, of Gary Crosby, Bing Crosby’s son, who was rumored to have underwritten Smart Alec. Her third husband was “Hairdresser to the Stars” Jack Sahakian. And, in 1959, she worked as a choreographer on the film Seven Thieves, teaching Joan Collins to perform stripping routines.  In 1957, she actually appeared in a legit play, taking the Jayne Mansfield role in the Dallas production of Will Success Spoil Rock Hunter?, surely a sign of her growing fame. 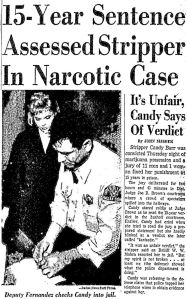 Fourthly, there were several arrests, which also helped with publicity (initially). In 1956 she shot, but did not kill, her abusive husband. Charges were dropped. In 1957, she was busted for marijuana possession and given a sentence of fifteen years. (It sounds like she was being railroaded). After many appeals, she lost her case and began to serve her sentence in late 1959, emerging in spring 1963 after being paroled. It was during this period that she palled around with Ruby, who gave her a pair of dachshunds to breed. Exiled from Dallas, she retired from dancing for a time, but returned to it in 1968. She was once again arrested for marijuana possession in 1969, but this time the charge was thrown out due to lack of evidence.

These were short term inconveniences but they fed her long term fame. Candy Barr was still being featured in men’s magazines in the mid 1970s. At her height, she was pulling down $2,000 a week to dance in the night clubs of Dallas, Las Vegas, Los Angeles, and New Orleans. She retired to her hometown of Edna, Texas in 1992.