Paul Frees (Solomon Hersh Frees, 1920-1986) made his entrance on a June 22. Seldom has there been a voice so well recognized without an equally well-recognized face to go with it. For well over four decades Frees’ voice was a staple of animated cartoons, radio, tv commercials, children’s specials, and film narration and voice-loops. And occasionally, just occasionally you would get the whole actor.

Frees began his career as an impressionist in what was left of local Chicago vaudeville in the the late 1930s as a comedian and impressionist under the name Buddy Green. In 1942 he broke into radio. Much like Orson Welles and William Conrad he was gifted with a voice PERFECT for the medium. Once he was in the door he worked all that he wanted; probably MORE than he wanted. In addition to his radio jobs, he worked for just about all the major animation studios starting in the 1940s. He was unique among voice over artists in that he could be the straightest of straight (serious, square) narrators, but could also do very funny characters. So on the one hand, we associate him with being the voice of dire portent in science fiction films, on the other, he could descend into wackiness. 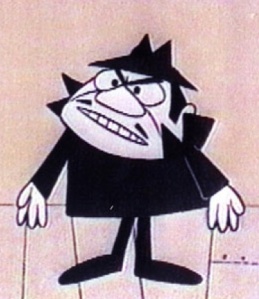 His best known character is Boris Badenov on The Rocky and Bullwinkle Show. I also associate him strongly with all the Rankin-Bass holiday specials. He plays several characters in Frosty the Snowman, Santa Claus is Coming to Town (as the Burgermeister Meisterburger), and Here Comes Peter Cottontail, among about a dozen others. And lots and lots of Disney. But he’s also highly present in several sci fi classics, most notably War of the Worlds (1953) and The Thing from Another World (1951). So distinctive is Frees’ voice that it is highly jarring, even alarming when he makes an on-camera appearance, as he does in both films. Even more unsettling is when his voice was used to replace that of another actor whose performance somehow marred the audio-track (e.g., because of a thick accent). In both  Tora! Tora! Tora! (1970) and Midway (1976), a Japanese officer will open his mouth to speak, and Paul Frees’ voice will come out.

By then, producers should have known better, and by the ’70s Frees’ voice as so recognizable that it had essentially become camp. Ernie Fosselius wisely employed his talents in this fashion in the spoof classic Hardware Wars (1978). But camp or not camp, Frees remained in demand until the day he died. He never stopped working. That’s the goal of all performers.

For more on the history of vaudeville, including youthful impressionist like Paul Frees, consult No Applause, Just Throw Money: The Book That Made Vaudeville Famous, available at Amazon, Barnes and Noble, and wherever vitally informative books are sold.