On Some Women Named “Billie”

This non sequitur of a blogpost came about because I noticed that show business has given us more than one female performer with the unusual first name of “Billie”. As a small child, I probably became aware of Billie Burke and Billie Hayes at around the same time and found it fascinating that a woman would have that name. It’s sort of a rare name for a female, right? I’ve never met one IRL.  As a kid I considered it the female equivalent of “A Boy named Sue”. At any rate, there seemed to be a sort of interesting cluster of them at the beginning of the last century; it seemed kind of fun to compare and contrast them. For example, there seems to be an abnormally high association of the name with fantasy and magic, and a few are pioneers in one way or another. Click on links to learn more about their fascinating stories.

This interesting actress will be getting her own post on Travalanche later this year, for she acted in silent comedy shorts, including many Mack Sennett and Keystone films with the likes of Charlie Chaplin, Fatty Arbuckle, and Mabel Normand. In the 20s she was in some major silent features, including Robin Hood (1922) and Lady Windemere’s Fan (1925). Her career did not long outlast the advent of sound, but ironically her life began to be even more interesting at that point. It has been alleged that she became the madam of a “high class bordello” for studio execs and their guests, where many of the call girls were hired based on their their resemblances to major screen actresses of the day. Surely a partial inspiration for L.A. Confidential?

This stage actress from Georgia started broke into films at Lubin Studios in 1913, was briefly at Nestor, then wound up at Keystone, where she supported the likes of Charlie Murray in his “Hogan” comedies, and Mack Swain in his his “Ambrose” series. After 1916 she retired from acting to manage the career of her daughter Gladys Brockwell, who became the bigger star.

Wife of Broadway producer Flo Ziegfeld, and star of stage and screen, most memorably as Glinda the Good Witch in The Wizard of Oz.

Started as child performer in vaudeville and melodramas in her native San Francisco, by age 17 was appearing in films (mostly comedies) for Kalem Studios. Later worked for Al Christie at Nestor, then at his own studio, and co-starred in the successful “Strand” Comedies with Jay Belasco, cousin of David Belasco. She also made comedy shorts with Joe Rock.  She was in nearly 200 films between 1913 and 1925. After this she retired to be a singer. More here.

Artist model, Ziegfeld girl, and major star of silent movies such as The Black Pirate (1926) with Douglas Fairbanks. She was a major sex symbol of her day, and is also famous for a three year affair with Howard Hughes.

Prior to developing her fan dance and changing her name to Sally Rand, this performer had danced in vaudeville and nightclubs, and appeared in Al Christie comedies with Neal Burns under the name Billie Beck.

I’m anxious to dig out the facts on this lady, as almost nothing (dates of birth or death, birth name, or her early and late life) is available readily to hand. All I know is that she was in the Broadway show You Said It (1931) with Lou Holtz, and that she had a very intense year (1934-1935) of appearing in movie shorts, many of which I’ve seen, including the very early Bob Hope musical short Paree, Paree (1934), Soft Drinks and Sweet Music (1934) with Georgie Price and Sylvia Froos, and a couple of comedies with Shemp Howard and Roscoe Ates. If and when I learn more I will share it here.

You mayn’t know the name but you know the face, right? She started out in vaudeville! She later became a bit player in tv sit coms and John Hughes movies like Sixteen Candles (1984) and Home Alone (1990).

I am way overdue to do a post on this distinctive and tragic jazz singer who remains extremely influential to this day. She took her stage name from Billie Dove (above).

Singer and jazz trumpet player — in fact, she was the first female to play in the brass section of a major jazz orchestra (Woody Herman’s). She later fronted her own bands.

Actress and voice over performer best known for being the voice of Rudolph the Red Nosed Reindeer in Rankin-Bass specials!

While American audiences know her best for playing the sinister Mrs. Baylock in the original 1976 version of The Omen, she was was major sex symbol in British films of the 1950s, and one of the principal stage collaborators of playwright Samuel Beckett.

Country singer from Louisiana who was married to Hank Williams and Johnny Horton (“The Battle of New Orleans”) and had an affair with Johnny Cash.

Nashville singer best known for her 1975 #1 Country Hit “Blanket on the Ground”.

Champion women’s tennis player and feminist icon. But we include her on this list mainly because she re-created her famous “Battle of the Sexes” feud with Bobby Riggs on The Odd Couple in 1974.

English pop singer of the Swinging Sixties best known for her 1963 hit “Tell Him”. She is said to have taken her stage name from Billie Holiday and Sammy Davis Jr. 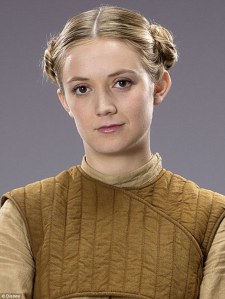 Like a lot of “old school” first names, Billie-for-Girls is in the midst of a strong comeback. There are numerous female Billies on TV and the internet at present, but for the sake of sanity I’ll only mention one timely and topical one. Billie Lourd is the daughter of the late Carrie Fisher and granddaughter of the late Debbie Reynolds and Eddie Fisher. She is a star of the tv show Scream Queens and the most recent Star Wars films.

To find out more about show business history consult No Applause, Just Throw Money: The Book That Made Vaudeville Famous, available at Amazon, Barnes and Noble, and wherever nutty books are sold. For more on early  film please see my new book Chain of Fools: Silent Comedy and Its Legacies from Nickelodeons to Youtube, just released by Bear Manor Media, also available from amazon.com