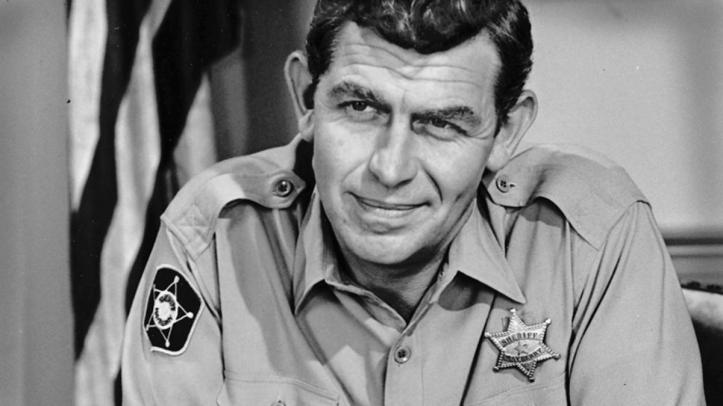 Andy Griffith was born on June 1, 1926. Look at that face! It seems strange to exist in a world without him. He and his best known character seem like Benjamin Franklin or something, part of the bedrock of America. While he occasionally played villains (in fact, his best known role, apart from Andy Taylor, was a villain), Griffith seemed to radiate decency, a good heart, and sound judgment — our fantasy of what we’d love a small town sheriff to be. (As opposed to the dude who catches you in his speed trap, glares at you impassively through his sunglasses, chucks you in a cell when you can’t pay his “fine” and then kicks the shit out of you while calling you a “Yankee”).

Griffith defied the Southern stereotype in all sorts of ways. Born and bred in rural Mt Airy, North Carolina (on the Virginia border) he discovered singing, acting and playing musical instruments when in high school and was strongly encouraged by some wise teachers in those pursuits. Later he attended the University of North Carolina. Something clicked into place when I read that he appeared for several years in one of Paul Green’s historical pageants called The Lost Colony. I have yet to blog about Green, an interesting figure whom I learned about through my studies of the Group Theatre. Green’s play The House of Connelly was the Group Theatre’s first production. It was one of the things I was thinking about when I named my play House of Trash. 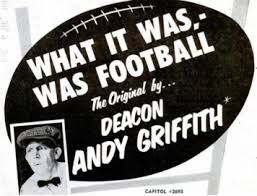 In the 50s, Griffith first gained widespread notice as a comedy monologist and storyteller in nightclubs. His 1953 comedy record What It Was, Was Football became a popular seller. 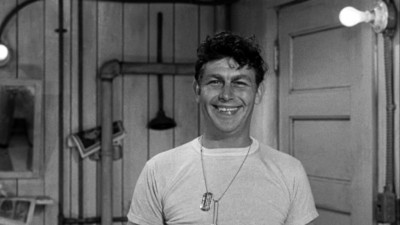 This led to him being cast as the lead in the tv, Broadway and film versions of Ira Levin’s No Time for Sergeants (tv and stage versions were 1955; film was 1958). His character in the story was a cheerful rube and bumpkin, which formed much of the basis for the Andy Griffith spin-off series Gomer Pyle, USMC. 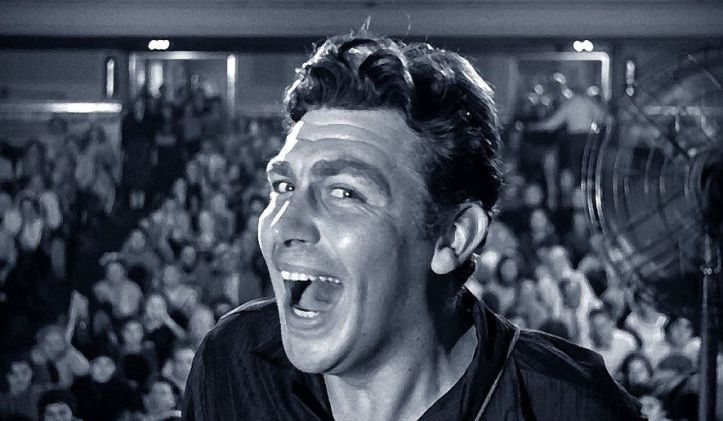 In 1957, he enjoyed what ought to have been a cinematic breakthrough. He was cast as the lead in Elia Kazan’s amazing film A Face in the Crowd. Written by Budd Schulberg, it’s a political story about a seemingly affable good old boy named Lonesome Rhodes who becomes enormously popular on records, television and in films as a folk singer…but then becomes power mad, not just for success in show business but for political office. He’s a crazy demagogue using the power of television just as Huey Long had used radio a couple of decades earlier. It seems clearly inspired by the phenomenon of Elvis Presley, who had no such political designs, but might have been a formidable and damaging force if he had. This dystopian vision would see a later incarnation in the 1968 acid nightmare Wild in the Streets. And then, in 2016, the nightmare became true when a ruthless tv reality star became President of the United States, which is why interest in A Face in the Crowd has been increasing over the last several months, just as copies of The Origins of Totalitarianism have been flying off the shelves.

Anyway, Griffith is incredible in it, just an explosion of raw, animal power. People didn’t know what to make of the film at the time; reviews were mixed. In some ways it might have seemed a career killer for Griffith to play a character so similar to himself, and yet so ugly. (For another example, there’s Milton Berle’s 1949 Always Leave Them Laughing, where Berle’s character is a total jerk who seems oddly like…Milton Berle). 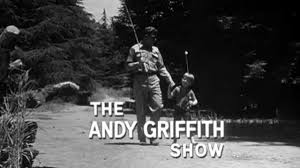 Griffith’s electric performance did not lead to a stellar movie career, but Griffith did come to dominate television for three and a half decades. He had a guest shot on Danny Thomas’s Make Room for Daddy in 1960 in which he played a southern sheriff. This led to his own series, (produced by Thomas and Sheldon Leonard), The Andy Griffith Show, which ran from 1960 through 1968 (Griffith left in 1967).

This show (in re-runs) was a major staple in my home when I was growing up. It’s mesmerizing, not just for the terrific writing and acting, but for its level of FANTASY. In a way, it is just as unreal a TV show as Bewitched or I Dream of Jeannie. It takes place in an idyllic Southern town called Mayberry, North Carolina, clearly based on Griffith’s home town of Mt. Airy. But while it takes place in contemporary times (the 1960s) the town’s quiet, isolated nature feels as though it were happening in much earlier times, decades earlier. People seem to spend all day sitting on porches in rocking chairs, swatting flies, catching fish, having picnics. Most episodes, a stranger will drive into town, stirrin’ up trouble of one kind or another, interrupting the placid stillness of this rural Shangri La. 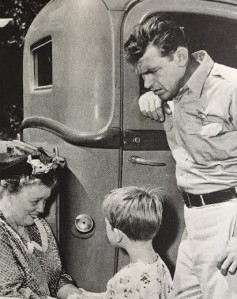 The only kind of people who DON’T drive up, or live there to begin with, are BLACK people. And this would be exceedingly odd in a North Carolina town, would it not? Furthermore, the entire show aired during the Civil Rights Era, when interracial strife was happening throughout the country. The omission is glaring; it speaks volumes. But the creators of the show were on the horns of a dilemma. More than one actually. This was a time of transition. America was ostensibly past the era of overt, intentional racism in entertainment, the ridiculing of African Americans, the hiring of actors like Stepin Fetchit or Mantan Moreland to be the butt of jokes. And Griffith was a liberal; that wouldn’t have been his style anyway. (He later campaigned for Barack Obama). But, unless you did a period show, there’d be NO WAY to include African Americans without talking about the changes going on in the country (as in later shows like I’ll Fly Away or In The Heat of the Night). And that was far beyond what anyone in tv was ready for at that stage. It wasn’t until the advent of All in the Family (1971) that that line would be crossed. And yet you couldn’t NOT talk about it either! How do you show black people in a Southern town without showing racists? That would be even more of a fantasy! So the solution seemed to be to set the show in an alternate universe where there were NO black people in North Carolina. The unintentional (I think) by-product ends up being just as racist in the long run. The producers didn’t just avoid controversy — they wrote black people out of the story of America. There’s something Orwellian about it.

Griffith said in later years that he was embarrassed about his acting in the first couple of seasons of the show, which hearkened back to the country rube he had played in No Time for Sergeants. But eventually he found his stride, which was, as sheriff, to be the straight man in a town full of crazies. He kept his cool, and let everyone else in town be the nitwits. In this, he set a template that would be riffed on in many a later show: such as the titular character in Barney Miller, or Alex Reiger in Taxi. The job is to be the sensible guy, who solves everyone else’s problems. His genius comedy partner was Don Knotts, with whom he’d worked in No Time for Sergeants. As Deputy Barney Fife, Knotts job was to go overboard, and LOSE his head, and the chemistry and the acting between them was stellar. Other characters included Aunt Bee (Frances Bavier), his son Opie (Ron Howard, who became one of Hollywood’s top film directors), Floyd the barber (Howard McNear), Gomer Pyle (Jim Nabors), Goober (George Lindsey), County Clerk Howard Sprague (Jack Dodson), Otis the town drunk (Hal Smith), Emmet the handyman (Paul Hartman) and the crazy hillbilly Ernest T. Bass (Howard Morris) and many others. It all adds up to something like Our Town. But we regret that it exists in a parallel universe that only includes Anglo-Saxons. Which I guess means it’s not YOUR town? 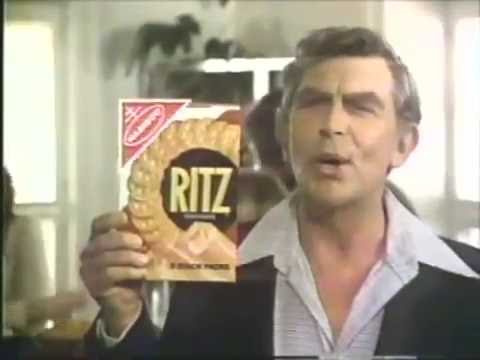 Griffith left the show early and very much on purpose so that he could pursue other projects. The Andy Griffith Show became Mayberry R.F.D., and the unlikely property of Jack Dodson (Howard) and lasted until 1971. 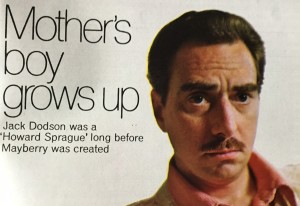 As for Griffith, other series were tried, and failed. He was in a lot of memorable tv movies, though. He’s in the notorious anti-drug film Go Ask Alice (1973). He played a cop who actually solves crimes in Winter Kill (1974). When he was cast in movies for cinematic release, they tended to cast him as parodies of himself, as in Hearts of the West (1975) and Rustlers Rhapsody (1985). And of course, he became the highly visible pitchman for Ritz Crackers, inspiring the title for this post. We thought that campaign was hilarious when it came out, both for how it played on Griffith’s persona, but also because of the lameness of the slogan. But ya know what? We did imitations of it incessantly — and that is what advertising is all about. 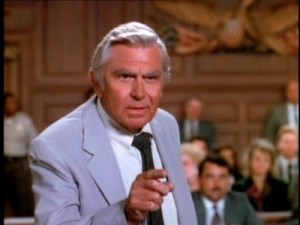 Then, amazingly, his career got another burst of wind when he played a small town southern lawyer in Matlock (1986-1995). This show aired precisely when I was watching very little tv. To this date I don’t know if I’ve ever seen an entire episode. Although, my former brother-in-law, who was a musician in the L.A. area, was hired to play guitar in the background on one episode, and got to chat with the gracious Griffith, who played guitar himself — as if you didn’t know.