Eddie White: “I Thank You” 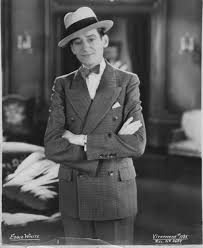 White comes to the attention of modern buffs almost entirely from his 1928 Vitaphone short called I Thank You, after his oft-repeated (by him) catchphrase. When you’ve seen a whole mess of Vitaphones, you easily lump them into categories. Some, like Burns and Allen, and Rose Marie, are folks we already know. Some, maybe most, are folks we don’t know and leave little impression. And a discrete handful are folks we don’t know and make a huge impression: a great act, big talent, a vivid or eccentric personality, sheer weirdness, or whatever. Those are everybody’s favorite Vitaphones and I think those end up being the ones we see for a reason; until recently the screenings were almost always curated by the savvy Ron Hutchinson of the Vitaphone Project (RIP), who had the ears, eyes, nose, bones, brains, and guts of an old time vaudeville producer, which also means knowing what contemporary audiences will respond to.

At any rate, I Thank You is just such a short. Eddie White is one of the memorable ones. Tall, thin, and lanky, with a scrawny neck, enormous ears, and a high-pitched voice, you’d swear in watching the film that he was an adolescent, no more than about 15 years old. That was the impression I took away the first time I saw the film several years ago: that he was a precocious, talented teenager, probably from New York’s Lower East Side. The ethnic jokes and the crowd pleasing song set, featuring, “Let a Smile Be Your Umbrella (on a Rainy Day)”, “Get Out and Get Under the Moon” and the show-stopping “Mammy”, probably planted that idea. But I was off.

As we see from his birthday year, the young man was actually 30 when this Vitaphone came out. Its national release was probably the high point of his long career, which was mostly East Coast based, concentrated in Philadelphia, Atlantic City and New York. Born in South Philly, he debuted as a young man at the Old Norris Theatre in Norris, Pennsylvania and was using the stage handle “Eddie White” by 1920.

In the 20s he seemed an up-and-comer. He was a big time Keith’s act by mid-decade, one sees references to him playing important big time houses like New York’s Hippodrome.

White became associated with the famous 1932 song “Sam, You Made The Pants Too Long”, though Milton Berle had written the parody lyrics and Joe E. Lewis had the 1933 hit record. Vaudeville was dying around this time and the path of White’s career is hugely instructive about what the hustling performer did to fill the time with bookings. A small announcement in a 1936 issue of Billboard seems pivotal. The item describes White as a vaud vet who would now be officially turning his attention to night clubs. And thereafter he seemed to work pretty steadily as an m.c. and entertainer at night clubs and resorts, most especially the Steel Pier in Atlantic City, although one continues to find references to him playing dates farther afield in places like Pittsburgh and Ohio. Part of White’s legend is that he became a figure in the career of the Jersey-based burlesque comedians Abbott and Costello, when he saw them performing and put them on at the Steel Pier, where they first began to attract more widespread notice.

White produced and hosted a variety revue called The Zanities of 1943 in Philadelphia that got good notices. He headlined in the Palace Theatre revival in 1955. He retired from show biz in 1959.

I had the thrill of talking to White’s only child Jay Weintraub (b. 1933) the other day, and he helped add texture for White’s later years. He said the family moved to Chicago for three years, where White had a steady gig at a night club. He said his famous friends included Berle (who’d given him “Sam” to sing), Judy Garland, Red Buttons, Henny Youngman, and of course Abbott and Costello (Weintraub recounted an anecdote where Costello flew the family out to spend a few days with him in Hollywood). And he said the William Morris Agency tried unsuccessfully to book Eddie for the Ed Sullivan Show, but he was rejected for being too “ethnic” — he did a lot of Jewish dialect humor, which might not come across to wider audiences (and might have offended some others).

But mostly, says Weintraub, “He was a family man. His main interests were his brothers and my mother and me. He would go off and do his dates for a few days but then he would always come home.”

Most intriguingly, Mr. Weintraub mentions an enormous scrapbook of clippings in his possession and THIS would be the great resource of information on Eddie White. Hopefully some day an intrepid researcher will gain access to it and convey its contents to the wider public.

Special thanks to the one and only Mr. Chuck Prentiss for connecting me with Jay Weintraub!