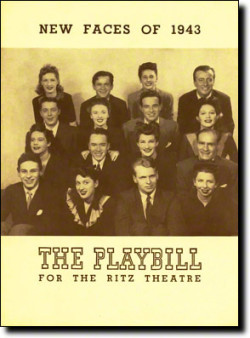 Several years ago I acquired a box of old theatre books that someone was discarding. Tucked in the pages of one of them, presumably as a bookmark, was a xeroxed program for a show called New Faces of 1952. This was my first awareness of Leonard Sillman (1908-1982).

I’m not a collector; in fact I actively try NOT to collect (however, books do seem to accumulate). But I understand why others  collect. There is a magic to stuff. Facts that you hear or read about feel theoretical. But when you can put your hands on something it becomes real. Here was a real old theatre program left by someone who had attended a Broadway show full on then-unknowns, “unknowns” among whom were Mel Brooks, Paul Lynde, Eartha Kitt, Alice Ghostley, Robert Clary, Carol Lawrence and Ronny Graham. “What a wonderful thing, I thought. Vaudeville was long dead in 1952, but Broadway still had this mechanism for introducing talent to the public in the form of these revues.”

The man responsible for the New Faces series, and much else, actually had a vaudeville background. He was 14 when he moved from his native Detroit to come to New York to love with an aunt and study dance with Ned Wayburn. He was only 16 when he replaced Fred Astaire in the road company of Lady Be Good. He performed in vaudeville for a bit with Frances Gershwin, sister of George and Ira, for a partner. He also appeared in three Broadway shows: Loud Speaker (1927), Merry-Go-Round (1927), and Polly (1929).

Then he headed out to Hollywood where he taught dance to movie performers, Ruby Keeler among them, and got bits parts in three films in 1933: Whistling in the Dark, Goldie Gets Along and Bombshell. It was there in 1933 that he also produced his first theatrical production Lo and Behold at the Pasadena Playhouse, featuring Eve Arden, Tyrone Power, Kay Thompson and Mr. Silliman’s own sister June Carroll. And Sillman performed in the show himself as well, as he often did throughout the years.

Lo and Behold was such a hit that he was able to bring it to Broadway under the title New Faces of 1934, and with new cast members, including Henry Fonda and Imogene Coca, with staging by Elsie Janis. The timing of this development is interesting. As we wrote here, the great Broadway revue series of the early 20th century were in their death throes when the Depression hit. Their aesthetics were old-fashioned; and the scale of the spectacle was becoming cost-prohibitive. This was like a passing of the torch. While Sillman himself was a dancer, and his shows certainly featured song and dance numbers, they didn’t have huge, expensive kickline choruses. Smart, sophisticated sketches, initially written by Sillman himself were the meat of it. Sillman was to create, produce and direct numerous such revues, many of them under the New Faces banner, through 1968! Some other “new faces” he introduced to Broadway included Van Johnson (1936), Irwin Corey (1943), Billie Hayes, Maggie Smith, all Johnny Haymer (all 1956), right down to Madeline Kahn and Robert Klein (both 1968). There was also a a film version, New Faces of 1937, with Milton Berle, Joe Penner, Parkyakarkus, Bert Gordon, and Harriet Hilliard, a radio version (1948), and a 1954 television version of New Faces of 1952.

In addition to his revues, Sillman also produced and directed book musicals and straight plays, most of which weren’t as successful as his revues. His last Broadway credit as producer was a 1970 revival of Hay Fever featuring Sam Waterston and Shirley Booth that ran three weeks. Leonard Sillman had a good eye for talent.

To find out more about  the history of vaudeville and variety entertainment, consult No Applause, Just Throw Money: The Book That Made Vaudeville Famous, available at Amazon, Barnes and Noble, and wherever nutty books are sold.