Mayer and Evans: The Cowboy and the Girl 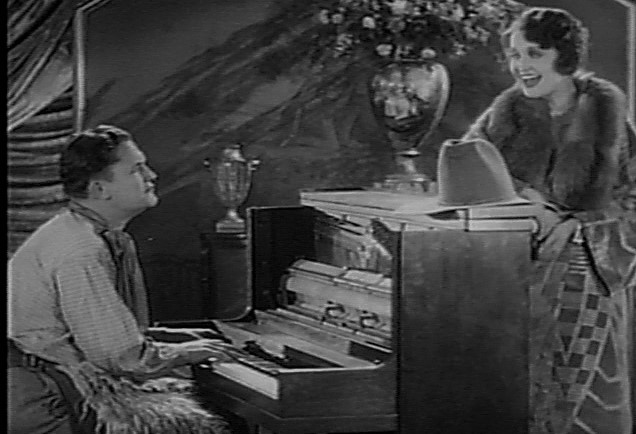 April 24 is the birthday of big band and jazz piano player Ray Mayer (Ray Maher, 1901-1949). Originally from Lexington, Nebraska, he started out in circuses and in some bands organized by trombonist and songwriter Larry Conley. In 1928, he teamed up with singer Edith Evans, whom he seems to have met while recording sides for Brunwsick Records. They were both high profile enough that they were able to play the Palace that year, and be featured in the Vitaphone shorts When East Meets West and  The Cowboy and the Girl, which is chiefly what they are known for today. The act is sort of like Blossom Seeley and Benny Fields, but if Fields were much more like Will Rogers — a gun-chewing, wisecracking country bloke in chaps. And the gag is that Evans is more urban and sophisticated. It’s a good act, but 1928 was a terrible time to start a vaudeville act. Vaudeville was dead by 1932. The following year, the pair got married and retired the act.

Evans appears to have left the business at this point, but Mayer worked steadily. He appeared in scores of films until his death, often B movie westerns, mostly bit parts. And he’s in half a dozen Broadway shows from 1940 through 1946, including the original production of Louisiana Purchase and Eddie Cantor’s Banjo Eyes. Mayer died in 1949 while on traveling to a performance. More about the pair can be learned at JazzAge20s.com

To find out more about vaudeville history, consult No Applause, Just Throw Money: The Book That Made Vaudeville Famous, available at Amazon, Barnes and Noble, and wherever nutty books are sold. For more on early  film please see my book Chain of Fools: Silent Comedy and Its Legacies from Nickelodeons to Youtube, just released by Bear Manor Media, also available from amazon.com etc etc etc