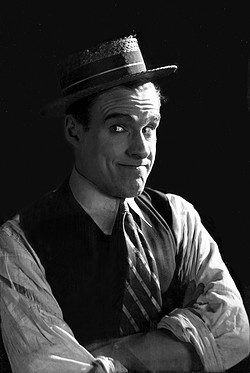 April 21 is the natal day of British actor/ comedian/ director Walter Forde (Thomas Seymour Woolford, 1898-1984). Forde was the son of music hall comedian Tom Seymour, joining his father onstage as a child, where he learned to be an actor and physical comedian. At his dad’s knee, by his own account he learned “tumbling, eccentric dancing, singing, piano, violin, concertina (one tune only), juggling and cartooning.”

In 1920, he wrote and starred in a series of British silent comedy two-reelers, playing a bungling character named “Walter”. The films were created in collaboration with his father, and Walter’s character often wore a straw boater and shared certain similarities in personality with Harold Lloyd. In 1923, Forde and his father tried their luck at Universal in the U.S. Forde only stayed a short time; Seymour remained in Hollywood. Forde went back to London and resumed the Walter series, directing several of them, and achieved even greater success in his home country. In 1928 he began directing features and phased out the Walter character by 1930.

Forde’s career as a director in the sound era is interesting, for it suggests a different path somebody like Lloyd might have gone down had they been so declined. Lloyd had co-directed many of his films; after retiring as an actor he produced a couple, but after that he pretty much left the business. What if he’d tried his hand at directing?  Among the slapstick comedy men, Forde’s post-silent career trajectory seems closest to somebody like George Stevens, who’d begun as cinematographer on Laurel and Hardy pictures, moved up to directing shorts for Hal Roach, and then moved up to feature film directing in all genres, not just comedy. Forde was a very different kind of director from Stevens, but like him, he was by no means restricted to screwball comedy; he also did work in other genres, especially mysteries, crime dramas, thrillers, etc. Two of his better known films today are The Ghost Train (1931 and later remade again by Forde in 1941) and Rome Express (1932). Much like Alfred Hitchcock, he worked in close collaboration with his wife Culley, a former continuity girl. In the post-war era he had difficulty getting films made; his last was Cardboard Cavalier (1949). He retired to Los Angeles for his net three and a half decades.

Many of his films, including some Walter comedies are available on Youtube; you should check ’em out!