Thoughts on On Bette Davis 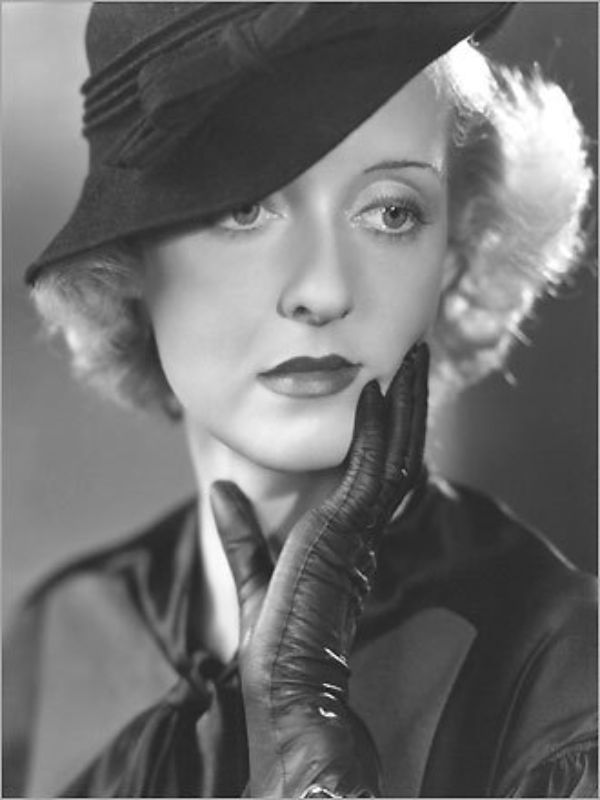 Bette Davis (1908-1989) was born on April 5. Having just given a good deal of attention to her rival Joan Crawford (an antagonist beyond the grave thanks to Feud: Bette and Joan) I herewith give equal time to Davis.

As we expressed in our earlier post, my connection to Davis has historically been stronger than any I ever felt for Crawford. For one, Davis never stopped being a movie star. She remained in the public eye until she died in 1989, when I was 25 years old. Her last film Wicked Stepmother was released the year of her death, and she was always on television talk shows and so forth. I’d seen many of her films (both classics and contemporary ones) when still a young person. By contrast, Crawford retired when I was five years old.

And then there is the fact that Davis was such the quintessential New Englander. She was from Massachusetts, and always had that accent. So many actors had to learn to speak “Mid-Atlantic” during the classic studio era; I imagine the studios never bothered doing that with Davis. Her accent was already appropriate for stage and screen. She reminded me of the older women in my mother’s family. Davis attended boarding school at Cushing Academy in Ashburnham, Massachusetts, which is quite close to my mother’s hometown. Like my grandmother and aunt, her actual first name is “Ruth”; my sister and niece also have that as their middle name. I feel a close regional and cultural connection. I’ve recently learned I’m distantly related to her; she is quite literally “my people”

Feud gives a false impression about the length of Davis’s career by having Crawford mutter something to the effect of “She’s always been there, dogging my every step”. It’s plausible and even probable that Crawford felt that way, but doing so would be a convenient and vain way of rewriting history. Crawford was slightly older, and first achieved fame and stardom in the silent era. She began making films in 1925, six years before Davis. Davis, on the other hand, was a stage actress, and entirely a creature of talkies. She fell in love with the stage in high school, and had auditioned to be part of Eva LaGallienne’s company, which reveals early ambitions to be a serious artist, an ambition she never lost. Rejected by La Gallienne, she studied at a dramatic school run by John Murray Anderson — a much more show bizzy kind of preparation. But her very screen name reveals something that set her apart not only from Crawford but from most of the other actors in the film colony. She used the French spelling of Bette from Balzac’s Cousin Bette — a demonstration that she not only read books, but read Balzac.  Her (real or imagined) superiority is baked right into how everyone is forced to spell her.

Nowadays, both Davis and Crawford are most often regarded in terms of their mature work, for their years as “psycho-biddies”, feuding and otherwise. My Crawford piece worked backwards, building up to the revelation that she had originally been a major sex symbol; it’s what underlay her image until the end. With Davis, we’ll go forward chronologically and lead with the fact that she, too, was tried as a sex symbol, though that period was relatively brief, and was shed for good and all, even widely forgotten, once she began winning accolades for playing unglamorous roles in the late ’30s.

But in recent years, just as with Crawford, thanks largely to TCM, I have discovered that there actually had been a sexy Bette Davis, though the period was much briefer, and plenty of people always denied she could ever be beautiful or sexy, including, significantly, herself. When she originally came to Hollywood (she later said), “I was the most Yankee-est, most modest virgin who ever walked the earth.”  But in the Pre-Code years they tried to tart her up a bit. They made her a platinum blonde, like Jean Harlow or Carole Lombard. And, to my eyes, she pulled it off. Of the many Bette Davis mannerisms one of the most prominent is a coquettish way she had of darting those enormous eyes all over the place: charming, scheming, flashing. It is a quality that suits a young girl best, and works for her as an asset when she is closest to girlishness in the early ’30s (when she was in her early ’20s). When she got older, it became another sort of asset. It was disturbing. But when she was quite young, it could be fetching, even seductive. 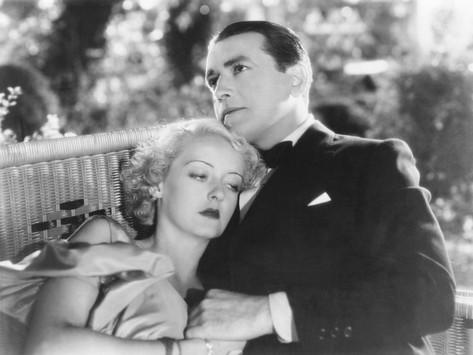 What she rarely seemed to me, however, is vulnerable. Something about her seems hard, manipulative, and calculating, even from the beginning. I’ve often wondered if she wasn’t on the Asperger’s or sociopath scale — she seems dry-eyed for an actress. She’s got that cold stare, with those enormous eyes — reminds me a lot of the (much later) actor David Hemmings. They look like they’re sizing you up to see where they can cut off the best slice. In her early years, Davis was often cast as prostitutes, rich party girls and the like. But in the Pre-Code era that had special appeal. I particularly like her in The Cabin in the Cotton (1932), where she plays the daughter of a wealthy planter who persistently tries to entice a young tenant farmer (Richard Barthelmess) away from his noble goals of raising himself up by his own exertions. This is the one in which she speaks the immortal line, “I’d like to kiss ya, but I just washed my hair.” Somehow the content of the film makes the otherwise innocent phrase “Cabin in the Cotton” sound as dirty as “Roll in the Hay” or “Snake in the Grass”. I think this may be the sexiest role I’ve seen her in, although it may not be as well known as Three on a Match (1932), Of Human Bondage (1934), Petrified Forest (1936) or her Oscar winning turn in Dangerous (1935).

She is still occasionally playing the Siren as late as In This Our Life (1942), one of my FAVORITES, a camp-fest in which she plays the unbelievably wicked sister of angelic Olivia De Havilland — steals her fiance, ruins him financially until he kills himself, runs over somebody in her car, and then blames it on the family’s saintly and promising young black chauffeur.

While she is occasionally able to muster glamour in later roles it seems to take a lot of effort. Though her first large move towards deglamorization is The Private Lives of Elizabeth and Essex (1939), it seems as though the worm has already turned by Jezebel (1938) — ironic, given that the character is a Southern belle and a strumpet (though who could compete with the impression made by Vivien Leigh in Gone With the Wind the following year?) Private Lives is surprisingly early foreshadowing for her later psychobiddy persona. With Crawford, we don’t get anything similar until perhaps Possessed (1947), in which she plays a mental patient, and 80% of the role consists of flashbacks to when her character was still desirable and vivacious. Davis realized early on that her continued success rested on her ability to win respect for herself as an actor, as opposed to an object of desire. And after all, an actor is what she initially set out to be. Davis had three Broadway roles under her belt before she went to Hollywood; by contrast Crawford had been a chorus girl. Crawford was about her body. She may have been idiosyncratic in how she applied her make-up in later years, but she never precisely “lost her looks”, and in fact was showing off her legs to good advantage as late as Berserk (1967). Crawford had also worked hard to gain respect as an actor, but she didn’t have to work nearly as hard as Davis did to remain viable.

That said, though Davis has this widespread and well-deserved reputation as an actress, two Oscars, an ocean of accolades, I can’t say she has ever properly moved me, which is normally considered a principal part of any actor’s job. She has amused me, scared me, impressed me, even wowed me, but she has never moved me to tears or too much worried me. She is theatrical, she is a star, but she is never really vulnerable, as, say, Katharine Hepburn is vulnerable in Alice Adams (my favorite Hepburn performance). She achieves her effects by showy, sneaky subterfuges for the most part — you know you are supposed to feel sympathy for her because she has made herself ugly for the character. That is a kind of risk and a kind of bravery and a kind of nakedness, but it’s still not emotional.

Anyway, I’ve scarcely scratched the surface of the gigantic topic of Bette Davis’s career. The focus of this post was meant to call attention to her appeal in her earliest years, as I did with Crawford. For more on her late horror pictures go here. I’m sure there’ll be more than one additional post on this worthy subject.