The High Aspirations of The Princess Theatre

On March 14, 1913, New York’s Princess Theatre opened for business. Aside from a couple of exceptions (e.g., the Palace, Niblo’s Garden) we don’t typically write about specific theatrical venues here on Travalanche except in passing. The lapse isn’t inadvertent. It simply isn’t my line. As a general rule, I have very little to say about buildings. But today we make an exception, both because this one had an interesting history, and because it was partially owned by my wife’s family!

The Princess Theatre was an outlier, both in terms of geography and in mission. It was located at 104-106 West 39th Street, off Sixth Ave, which is farther west than most (but not all) Broadway theatres, as well as a bit on the southerly side as the years passed (there also used to be plenty of theatres in the 30s, but gradually, as you know, 42nd Street became the approximate southern boundary.)

But beyond its relative remoteness, it was unusual in other ways. It was an early harbinger, both in size and in mission, of what came to be known as the Little Theatre Movement. At 299 seats it was far smaller than most other Broadway houses. The intimate scale was intentional. The venue was designed to present one-act dramas by a repertory company, a very early reaction to the commercialization of mainstream theatre certain people were already identifying, coming from an almost identical conceptual place as the later Off-Broadway, Off-Off-Broadway, and Indie-Theatre Movements (the only difference being that the response was coming from the commercial theatre industry itself). The main players in the venture were producer F. Ray Comstock and the Shuberts, with actor-manager Holbrook Blinn and theatrical agent Bessie Marbury (to whom I happen to be distantly related;  Katherine Marbury is my 12th great grandmother; her sister was Rhode Island founder Anne Hutchinson). 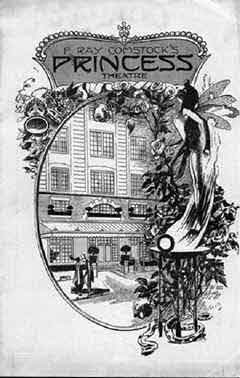 The first few years of the Princess were bumpy; the serious plays were not filling the seats. But the venture found success in the middle teens with a series of “thinking man’s musicals”, which have since become known as the “Princess Theatre Musicals”, with integrated songs, and books less crude than the standard fare of the day. Most of them were authored by the team of Jerome Kern, Guy Bolton and P.G. Wodehouse. The most successful of these was Oh, Boy! (1917) which ran for 463 performances.

In the 1920s, the theatre returned to its original mission of dramas. The best known plays from this period were Eugene O’Neill’s The Emperor Jones (1921, transferred from the Provincetown Playhouse) and the American premiere of Pirandello’s Six Characters in Search of an Author (1922-1923). But it was a tough slog. In 1928, after only 15 years, it ceased to be the Princess Theatre.

Next came a quarter century of name changes, transfers of ownership, and new missions: it became the Lucille Laverne in ’28, the Assemble Theatre in ’29, was shuttered from ’29 to ’33, then became the Reo Theatre, a cinema, in ’33. 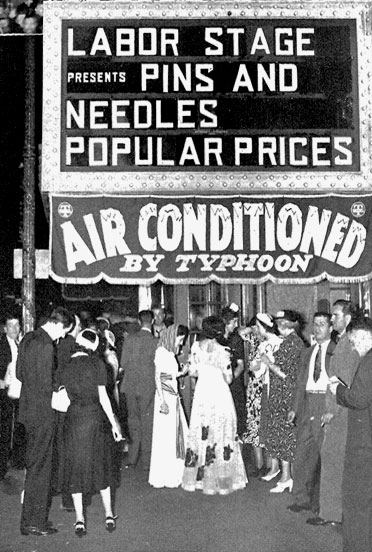 In 1934, the International Ladies Garment Workers Union acquired the space to use as a recreation hall. Normally, I bemoan such repurposing of precious theatre space, but this new ownership ironically resulted in the greatest theatrical success ever mounted in that location, the Depression Era labor revue Pins and Needles, which ran for 1,108 performances starting in 1937. The Princess was now the Labor Stage, and remained under that name for a decade. In 1947, the legendary Actors Studio was hatched in one of the theatre’s rehearsal spaces.

In 1947, it became Cinema Dante, which showed foreign movies; in 1948, the Little Met; and in 1952, Cinema Verdi. In 1955 it was torn down to make way for an office building. For more on the cinema years, and this theatre in general, see its entry at Cinema Treasures, a wonderful resource.

For all of its history, the Princess Theatre and its later incarnations seem to have been governed by moonbeams, a series of Noble Experiments. It is not atypical that the venture was short lived. But as I sometimes like to joke, the art of theatre would do okay if it weren’t for these damn audiences.

To find out more on theatre history, consult No Applause, Just Throw Money: The Book That Made Vaudeville Famous, available at Amazon, Barnes and Noble, and wherever nutty books are sold.